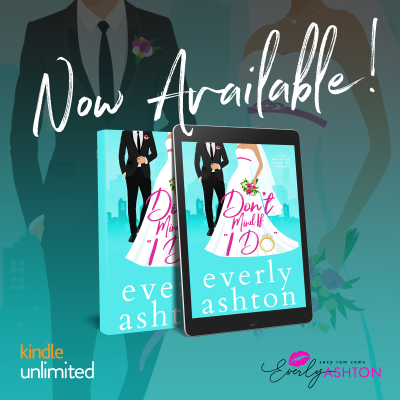 It’s not every day the woman who broke your heart asks to be your wife.

Life is good. I’m single. I’m an emergency room doctor. And according to my hookups, I’m hot AF.

Then she walks back into my life.

I haven’t seen Mazzy Pembrooke since the night she betrayed me. So when she comes into my work asking me to make good on a childhood pact and marry her, I’m speechless.

She’s the last woman I’d want to marry—even if it’s pretend and with a definitive end date.

But after I find myself in a sticky situation at work, marrying Mazzy might just benefit me too.

Once we’re living as husband and wife under the same roof though, I struggle to remember that I hate this woman and the fake marriage doesn’t feel so fake anymore.

Don’t Mind if “I Do” is a fake marriage, friends to enemies to lovers rom-com loaded with laughs. No cheating. HEA. 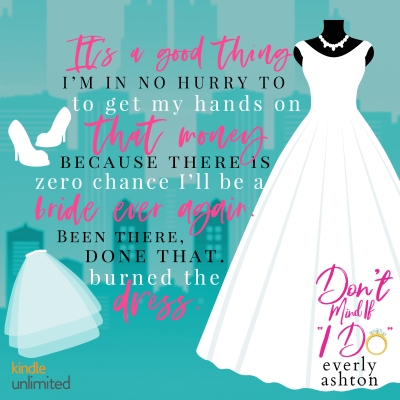 Everly Ashton’s books are so much fun! I’ve really been enjoying reading this series, since her debut book came out a few months ago. This time, we get Nick and Mazzy’s story — an enemies-to-lovers, fake marriage, second-chance romance that is fun to read with witty dialog, awesome characters and twists I wasn’t totally expecting.

I thought Mazzy was going to be a bit of an airhead, a socialite who was just looking for her next husband. She proved me wrong: Her looks were definitely deceiving, because she proved to be a strong heroine when her world got flipped upside down. She had some tough choices to make, and handled the situation with grace.

Nick and Mazzy are childhood friends, ex best friends, and there is that layer of history between them that gives depth to their story. Nick’s been holding a grudge against her for years, and there’s a wonderful journey between them as they hash out their issues and move forward as fake spouses.

Don’t Mind If I Do is a fantastic, entertaining second-chance/fake marriage romance! 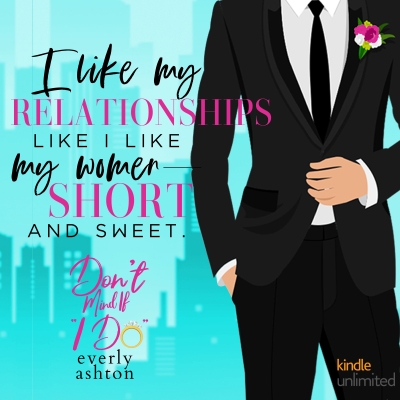 Everly Ashton is a USA Today Bestselling Author who wanted to try something a little different under a new name. She loves brooding heroes, spunky heroines, and happily ever afters. You can usually find her with a Kindle in one hand and a cup of caffeine in the other. And because she’s using a pseudonym she can’t tell you much more than that. 😉
Connect with Everly Ashton
Website | Facebook | Instagram | Goodreads | Facebook Reader Group
Hosted By