He wasn’t my friend until he became my enemy.

His center is freezing cold,

and his edges burn me when I get too close.

He is everything I want and nothing I am.

They say not to burn bridges,

but he burned ours to the ground.

She is the girl who wants to be seen,

but hates being noticed.

She was my friend, my tease, my confidant.

She is pure light against all my darkness.

The reason you burn down bridges,

is to build them up stronger. 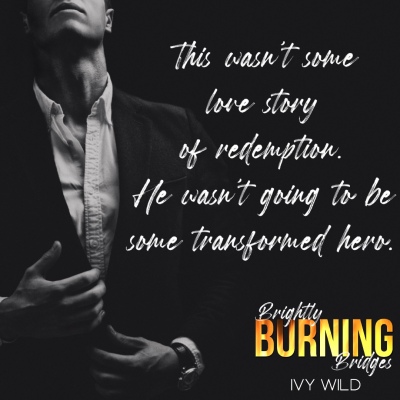 Ivy Wild is a new-to-me author, so I went into Brightly Burning Bridges with no knowledge of Silas. I’ve gathered from the previous books that he was really a jerk, and while there are some alphahole tendencies, I wouldn’t classify this as a bully romance. He’s mean and gives you whiplash, but I wouldn’t necessarily classify him as a bully. But I digress…

Silas and Skylar’s story is wonderfully told in dual POV between present day and flashbacks to high school 10 years ago. Their friendship starts off rocky, but there is a genuine thread of appreciation and respect between the two of them. Until the day that it all goes to crap because of Silas’ actions when it comes to Skylar’s private sanctuary, her bridge. Neither one of them ever forgot that day, even though Sky was sure that his actions meant she meant nothing to her. How wrong she was.

Both of these characters are broken, but Silas especially so. There is a sweet and vulnerable boy underneath the alpha facade, and once Sky really lets him back in, theirs becomes an epic love story.

In fact, she hated romance as a kid and was quite proud of that fact.
Basically, life is weird.
Married to her own alpha hero, she currently lives in various places of the world at various times thanks to his military career.
Her current side hustle is being a lawyer.
Connect with Ivy Wild
Website | Newsletter | Instagram | Facebook | Twitter | Amazon Author Page | Goodreads | BookBub
Hosted By: