You never forget your first love…

Every stolen moment we had between us was forbidden.

She was off limits.

I wish I could say I followed my own rules.

I lost her trying to make her mine.

Because in the end…

She was always my brother’s best friend. 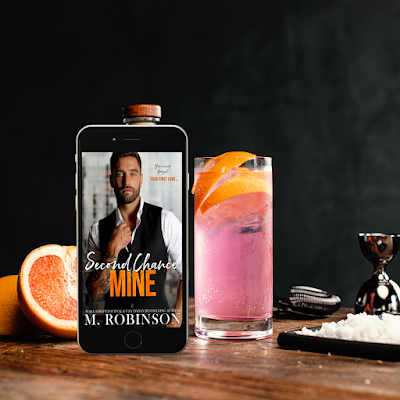 Sunny Shelly’s Review: 4 Stars
Second Chance Mine is a steamy enemies-to-lovers boss romance that closes out the Second Chance series by M. Robinson. Told in dual POV between the past and the present, Adrian and Paige’s is full of so many ups and downs as we get to see the heartbreak that tore them apart 10 years ago and how they come back together again.

Overall, this story is pretty low angst, and I hate when a best friend’s brother is “forbidden” just because it would go against some kind of bro code and the brother says she’s off limits. But that is the situation we have here with Paige and Adrian. However, when Paige and Adrian imploded all those years ago, she also lost her friendship with Cade. And to be honest, I didn’t like Cade all that much, so while I felt bad for Paige, I didn’t think it was a great loss.

Anyway…. it’s 10 years later and Paige is pushed into a situation where she is working as Adrian’s executive assistant thanks to her friend Belle (Second Chance Vow). As she stuffs down the feelings that return, Adrian decides that he has been given the opportunity to win back the one that got away. At first, winning her over isn’t so easy. But as he tries to protect Paige from a stalker, the dangerous situation pushes them closer together and Paige finds herself letting down all of those barriers that she’d built up to protect her heart.

Overall, this is a steamy second-chance romance with an alpha hero who is borderline obsessive, a healthy dose of dirty talk and suspense, and a whole lot of tension between the hero and heroine.

M. Robinson is the Wall Street Journal & USA Today Bestselling Author crowned as the “Queen of Angst” by readers around the world.

Dive into her visionary world that will take you on a rollercoaster ride of emotions and leave you wanting more.
She writes everything from contemporary to suspense romance and is best known for her novel, El Diablo.
When M isn’t in the cave writing her next epic love story, you will find her shopping and living on a boat in Florida with her real life pirate, her lobster, her husband Bossman. Sipping on Starbucks and hanging out with their two dogs, a German shepherd mix and a gordito Wheaten Terrier reading a good book. Or spending time with her family, who she is extremely close with.
Above all, M loves her readers more than anything and loves to connect with them! She is on all social media platforms but you will find her in her happy place the most. Her VIP Reader Group on Facebook or her second favorite happy place, Instagram.
Connect with M. Robinson
Website | Facebook | Instagram | Twitter | YouTube Channel
Reader Group | TikTok
Hosted By: