All I need is a place to hide for a few weeks.

The paparazzi were on my ass 24/7 and I needed a bit of breathing room—an escape from the madness—before the media frenzy begins.

Sure, I could have gone to a secluded cabin in the woods—but I didn’t want to be bored out of my mind. I’d seen enough wide open spaces as a kid from Texas to last me a lifetime.

So instead, I let my agent hook me up with a modest house in the burbs where we didn’t think anyone would find me hiding in plain sight.

I’d have a roommate; but supposedly, she was going to give me space. Stay out of my way and respect my boundaries. According to my agent, I wouldn’t hear a peep from her.

Wrong. He was wrong about everything and now my life was never going to be the same. 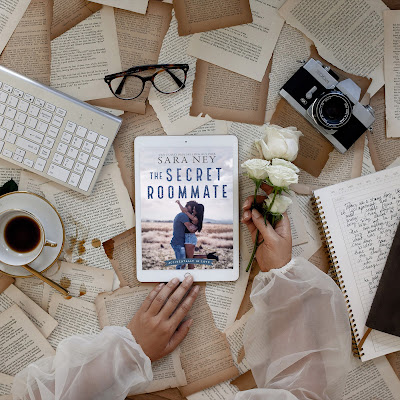 Sunny Shelly’s Review: 4 Stars
Man, I thought that Posey and Duke were going to kill each other with their prank wars before they ever got it on! The Secret Roommate was hilarious. Even though Duke was described as a giant a-hole, he was a squishy marshmallow of a giant when it came to Posey.

Football star Duke needs a place to hide out until news breaks about his trade in teams, and Eli and Molly (from The Make Out Artist) convince Molly’s former roommie, Posey, to let him stay with her for two weeks. Naturally, the first meeting does not go off without a hitch, setting these two off on the wrong foot. The pranks escalate from there, and even though Posey finds Duke to be a big doofus, she eventually sees a sweeter, softer side to the brute. And she finds his Texas twang irresistible!

This book is super cute. No major drama, just some stupid decisions that cause tension between them. It’s a feel-good romcom that will leave you with a smile on your face!