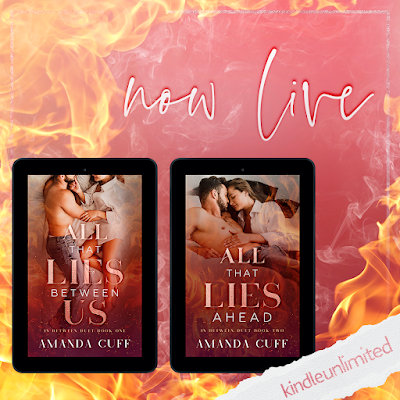 Happily engaged. Fulfilled by a lucrative career. Addison McCormick thought she had it all—until she caught her soon-to-be-husband cheating.

Forced to start anew, Addison decides a vacation is just what she needs to escape the wreckage of her life in LA, and serene Colorado is calling her name.

What she doesn’t expect to find is Chase Prescott: the sexy, brooding neighbor at the cabin she’s renting. She sees him as nothing more than a vacation boyfriend, a quick and dirty fling to help her get over her recent heartbreak.

But when that spontaneity leads to the surprise of her life, Addison discovers that Chase’s mysterious allure isn’t just a front, and that he has a secret that will change everything.
What happens when the fantasy they created crashes head-on with their harsh reality? Can Addison find her new place in a world she might not be welcomed?
Grab Your Copy Here!
Free in KU 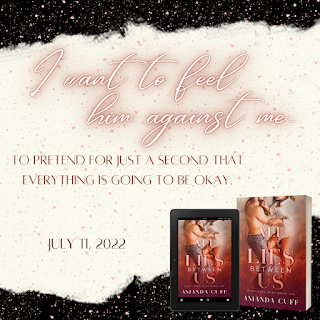 Sunny Shelly’s Review: 4 Stars
The In Between Duet is the first book I’ve read by Amanda Cuff, and I very much enjoyed Addison and Chase’s story. I didn’t think it needed to be spread out in a duet, but I was glad that both books released on the same day so that I could continue straight through with both parts!

In All That Lies Between Us, Addison’s life has been turned upside down when she found out her fiance cheated on her and her dad pretty much then writes her off for not putting up the front of the perfect, dutiful daughter. It’s almost a blessing in disguise because Addison was bored with her life as an attorney and she’d just been going through the motions with her fiance.

Addison drags her best friend, Olivia, along for a spur-of-the-moment trip to Colorado to get away from it all and reset… And finds herself resetting with Chase, the guy who owns the cabin next door.

Chase has some secrets and we don’t know what those are in All that Lies Between Us. There’s a reason he’s so hesitant to get involved with Addison, despite how much he immediately likes her. They embark on a week-long fling while Addison is in town, both of them knowing that whatever is between them has an expiration date.

But when an emergency takes Chase away and back to his “real life” sooner than expected, will his abrupt departure break Addison more than finding out her fiance cheated on her did?

This first book is a lot of setup, I felt. I really felt the spark between Chase and Addison came across on the page, but there wasn’t a lot of “meat” to their story. Well, keep on going for book two….

All That Lies Ahead is the conclusion to the In Between duet, and picks up where All That Lies Between Us left off. It’s been a few weeks since Addison and Chase had a steamy vacation fling, and now they are back to their real lives. And their real lives are complicated.

When Addison has to track Chase down at his family’s business, she knows that she will be delivering some big news to him. And she gets some shocking news in return. This story took a twist I didn’t see coming, and it was not a traditional take on this particular trope! As much as this story was about Addison and Chase trying to make their relationship work among his obligations, it is also about sacrifice and knowing that life can change in an instant.

This story was so full of love — romantic love, friendship, making a family of your own choosing. It warmed my heart despite the sadness of this story. I was on a rollercoaster of emotions reading the conclusion to this story, but it was as beautiful as it was heartbreaking.

I hope that Olivia and Drake get a book of their own, because I am totally shipping them! 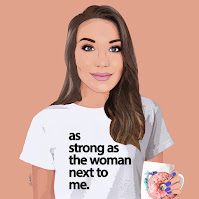 Amanda is a mom of four and military wife living wherever the government dictates. She squeezes writing time in between mountains of laundry, taxi mom duties, and stuffing her face with carbs. She never turns down a strong margarita, her husband’s cooking, or a good Netflix binge.

To learn more about Amanda and her books, visit here!
Hosted By: