Avery Fletcher makes a better friend than a lover—at least he thinks so. Well, him and every woman he’s ever dated. Now his encounters are brief and satisfying. There’s really no need to complicate things.

Though, when he sits alone on his porch listening to the cicadas, he has a brief lapse in judgment and yearns for someone to talk to.

Helena Davenport doesn’t need a man—nor does she want one. As heiress to her late father’s fortune and business, she’s here to impress. But apparently, you can’t get away from societal expectations—even in the twenty-first century, and the board of directors wants this queen to crown a king.

When she finds herself being tattooed by none other than bad boy Avery at a bachelorette party, she hatches a plan. He’s perfect—tattoos, unruly beard, and a sharp wit. Oh, and incapable of falling in love with her. He makes the perfect fake boyfriend.

She’ll get the company board off her back by giving them exactly what they asked for, and watch them eat their words. What could possibly go wrong?

Social events put the pair to the test, forcing them to get cozy—a little too cozy. The situation soon turns red hot and a little worrisome.

As the plan to stay platonic starts to fall apart, can the two keep their cool or will they succumb to the heat between them? 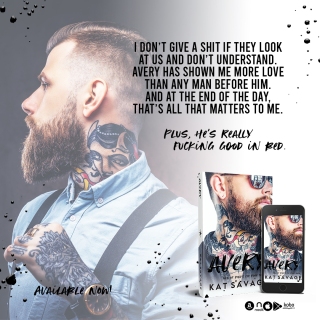 Sunny Shelly’s Review: 5 Stars
Each one of these Bird’s Eye books outdoes the last — and I have rated them all highly, so that tells you how much I love this world that Kat Savage has created! Avery has been the strong, silent type in the background of Hawk and Will’s books, and now he gets to shine like the tattooed superstar that he is in this fake relationship story.

Helena and Avery are magic. There is such an easy connection between them from the get-go. Avery is all rough and gruff on the outside with the heart of a giant teddy bear. I loved the different version of herself that Helena portrayed to everyone else in her life, but got to really relax and be herself around him. Underneath the CEO powersuits, Helena was a totally different person, and she really blossomed as her relationship with Avery grew. There’s no doubt that these two come from different worlds — but will their connection be enough to withstand the scrutiny that comes from a tattoo artist dating one of the most important financiers in the world?

I knew that the fake relationship between “the simpleton and the socialite” was going to be epic, and it really met all of my expectations! I need to track down Blythe’s novella and get the backstory on Helena’s sister and her husband! I received an advanced copy and voluntarily left a review.