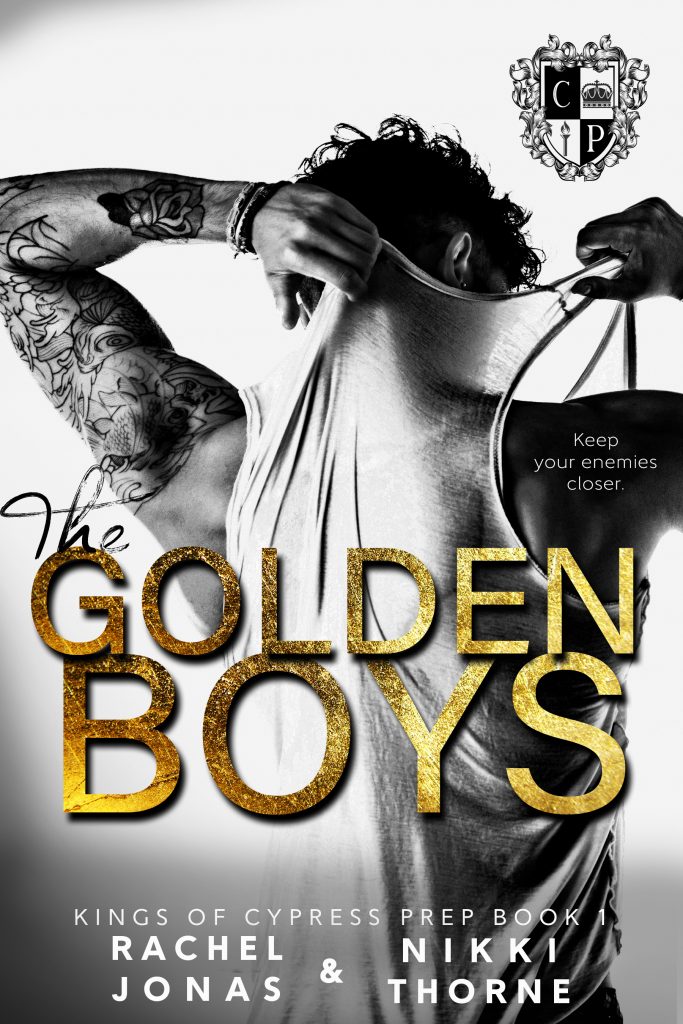 West Golden—so easy to hate, yet so hard to resist.

Don’t let that pretty face of his fool you. He isn’t the boy next door, or the kind you trust with your heart. He’s the devil in designer jeans, with all the charm of a bona fide psycho.

He swears I did something to cross him before I even stepped foot inside Cypress Prep, but it’s a lie. No one knows better than me that I’m all out of chances. One more misstep and I can kiss my future goodbye, which means I can’t possibly be guilty of whatever he thinks I’ve done.

West marks me with a target anyway, and as this town’s football star, no one dares to go against him. His money, status, and the loyalty of his equally entitled brothers makes him seem untouchable. Only, I know better than that.

This false god isn’t infallible like he wants the world to believe. Whenever I stare into those devilish green eyes, I see it plain as day. The chink in his armor. His one and only weakness.

The King of Cypress Prep has finally met his match and taking him down just became an inside job. 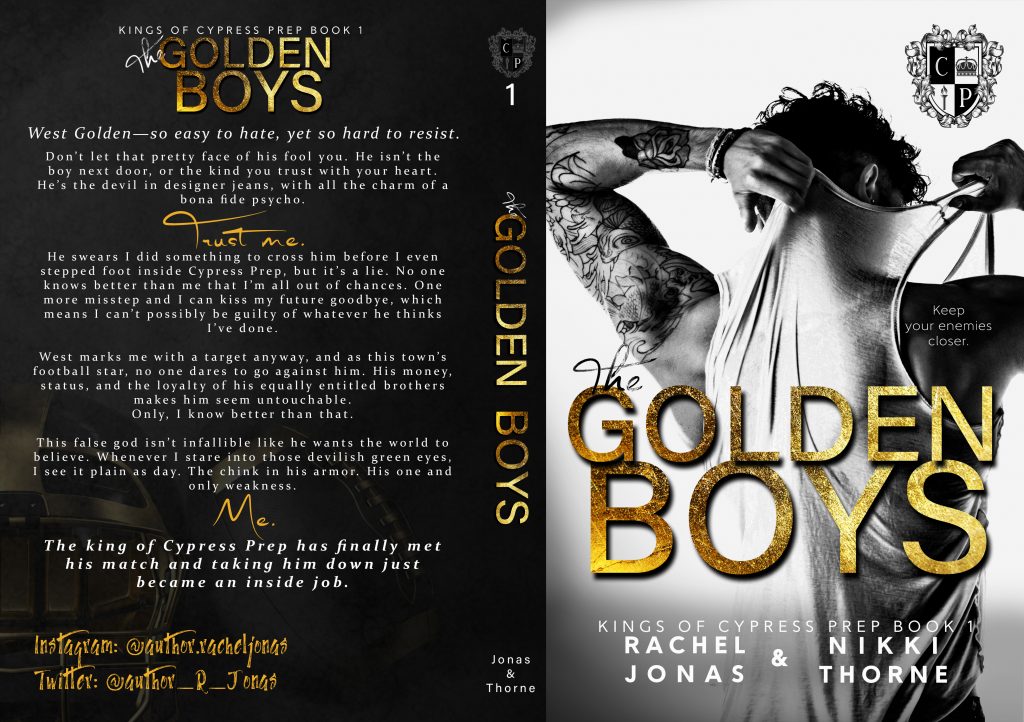 Add to your Goodreads TBR: https://bit.ly/TGB_GR

To celebrate the release of The Golden Boys, Nikki Thorne & Rachel Jonas are giving away a paperback and $100 Amazon gift card! Head here to enter: https://www.facebook.com/authorracheljonas/ 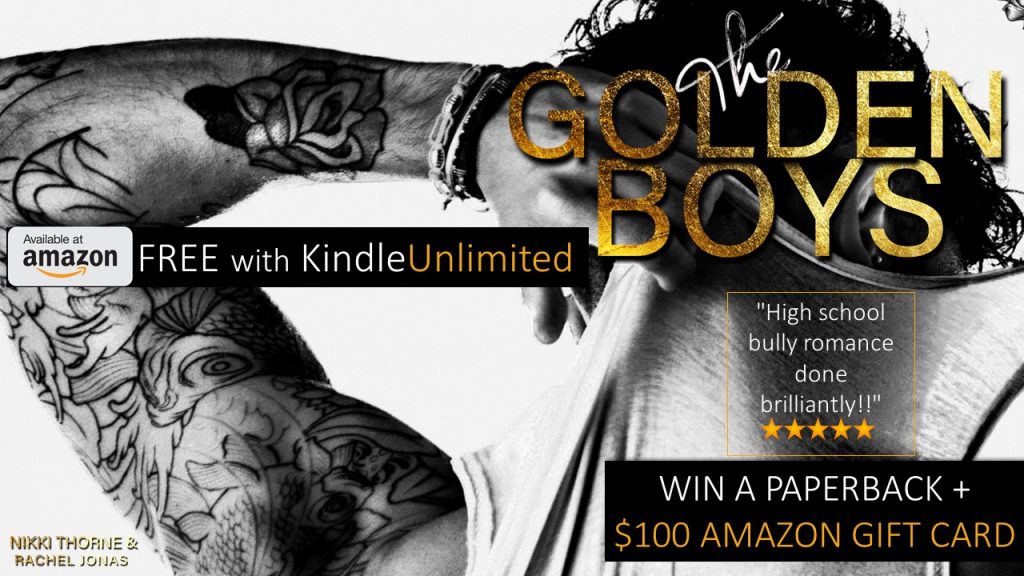 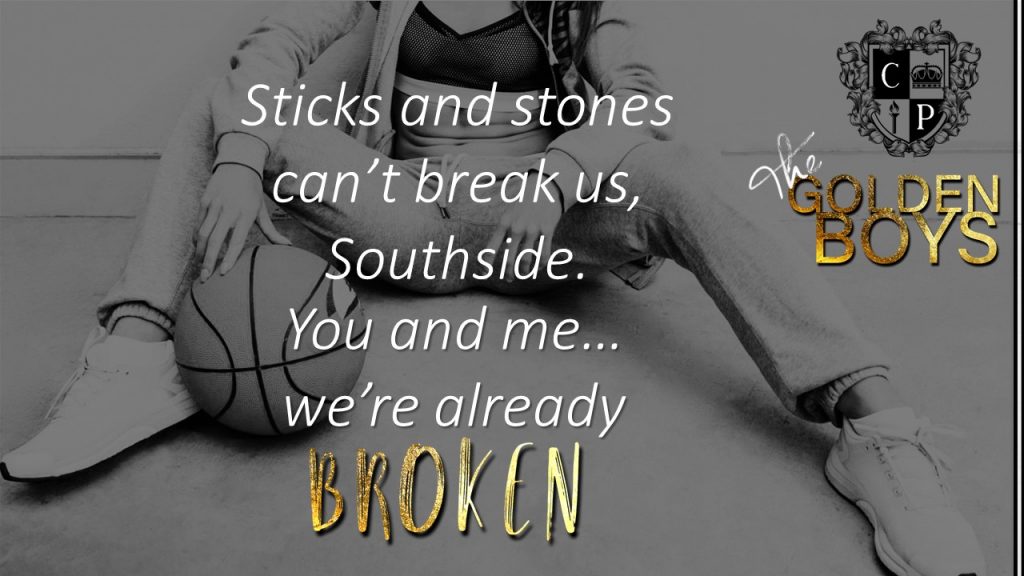 Welp, I pretty much devoured The Golden Boys in a day. Stayed up waaaay too late reading into the wee hours of the morning because I was so wrapped up in West and Blue’s story. I never liked bully romance all that much, but over the past few months, I can’t seem to get enough of them.

I really can’t wait for book #2, because I need more. Like, now. Is Blue guilty of what West is silently accusing her of?

Both of these characters are really broken. West has lived his entire life as the keeper of some dark family secrets, and Blue just has a horrible, horrible homelife that she is desperately trying to keep together for the sake of her little sister. West hates her something fierce — and feels that his reasons are justified — and Blue has no idea why he has it out for her. That hate fuels some intense interactions between them because their damaged souls are inexplicably drawn to one another.

I can’t wait to see what comes next in this series! I received an advanced copy and voluntarily left a review.