Love is a battlefield for a quirky matchmaker and the cocky football star who hires her to find him a wife.

As the owner of Perfect Pairings matchmaking service, Maddie McRae earns her living helping others fall in love. Dubbed the Wedding Whisperer due to her success getting couples down the aisle, the sweet Southern belle knows that the foundation of wedded bliss is built on similarities: opposites might attract, but they don’t stay together.

Which is why she’s holding out for her own Prince Charming, a perfect gentleman who will arrive one day and sweep her off her feet with his devotion, kindness, and charm.

Rude, arrogant, and notoriously allergic to monogamy, the hottest quarterback in the NFL is Maddie’s polar opposite. He’s also her new client. Her gorgeous, infuriating new client who’s paying her an outrageous sum of money to find him a wife. With his multi-million dollar contract on the line due to his behavior on and off the field, bad boy Mason is willing to pretend to settle down.

But when he starts to fall for the adorkable matchmaker who can’t stand him, the playboy finds himself in the game of his life to keep something he never thought he’d lose—his heart. 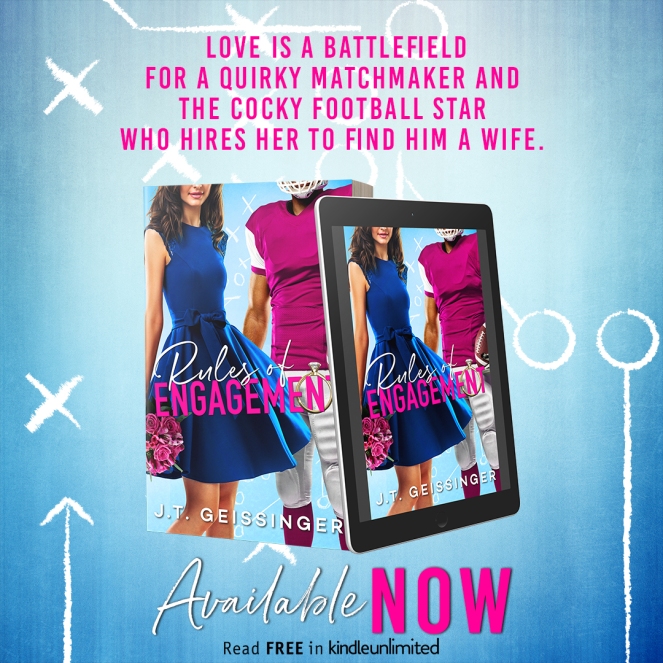 He jerks his thumb at his mansion. “Don’t you want a tour?”

“Of Hearst Castle? No, thanks.”

His expression tells me how incomprehensible that is. “Everyone always wants a tour. Always.”

Now he looks insulted. He turns to stare at the house, then turns back to me. “Nice?”

“Please don’t take it personally. I’m not trying to start World War III here. A house like that just isn’t my thing.”

“Will you stop repeating everything I say?”

“It’s just that I’m having trouble with the fact that you don’t like my house. Everybody likes it. Everybody. Especially women.”

I sign in exasperation. “Oh, for goodness’ sake, Mason, I could give a flying fig what everyone else thinks. I’ll take my cozy little cottage over this place any day.”

I fold my arms across my chest and turn my torso toward him. “Why are you so upset that I don’t like it when you don’t like it, either?”

“You didn’t have to. The closer we got to it, the more you constipated you looked.”

“Baloney. You hate your house. Admit it.”

Wild-eyed and wound up, he stares at me for a long, silent moment. Then he exhales in a huge gust and drops his head into his hands.

He says miserably, “I totally hate it. It’s awful, isn’t it?”

I pat his shoulder. “It’s beautiful, elegant, and absolutely ridiculous. Have you thought about asking the state legislature if they need new headquarters?”

He moans into his hands. “I don’t even have any furniture except a bed. You should hear how bad it echoes in there. And everything is marble, so it’s always freezing cold. Sometimes I wake up in the middle of the night and think I’m sleeping in a mausoleum!”

I can’t help myself. I start laughing again.

He lifts his head and glares at me. “It’s not funny!”

“Do you have any idea what I paid for this place?”

“Your gargantuan mausoleum?” I squint at it through the window. “I dunno. Bazillions?”

“I’m no financial whiz, Sparky, but I think they saw you coming.”

When he groans and drops his head against the headrest, closing his eyes, I try to reassure him. “I’m sure there’s some oil baron with twelve ex-wives and a hundred kids who’d love to move into it. With all the members of his country club. And their housekeeping staff.”

Mason opens his eyes and glares at me.

I try to stifle another laugh, but fail. “And the entire population of Portugal.”

Sounding panicked, he says, “But where would I live?”

“You say that like there are zero options between here and a cardboard box.”

“There’s a house for sale at the end of my block.”

That astonishes him so much it leaves him speechless.

“You’re right,” I say solemnly. “It’s only a three-bedroom. There’s not enough space for both you and your ego.”

He looks away. “I’m just surprised you’d want me living on the same street as you.”

“Are you kidding? Imagine how much fun we could have screaming obscenities at each other over the backyard fences. The neighbors would love it.”

When he glances back at me and sees me smiling, he smiles, too. “Yeah, especially when they hear your PG version of cursing. ‘Dingwaddle’ this and ‘flying fig’ that. They won’t even know what language we’re speaking.”

We smile at each other so long it starts to get uncomfortable. I look away, patting my hair to make sure no stray strands have escaped from my bun.

After a rough throat clearing, Mason says, “I guess I’ll go in, then.”

“Okay. Goodnight. And thanks again for dinner. I love that place.”

When he doesn’t respond, I glance over at him. He’s staring back at me with the same warm look that flustered me at the restaurant. “You’re welcome, Pink. Anytime.”

“So I’ll send you all the information on Stephanie as soon as I vet her file. Okay?”

“Sure. Looking forward to it.”

An awkward silence follows. Finally, Mason breaks it by saying, “Sweet dreams.” He opens the door and starts to get out.

He turns to me, his hand on the door and a question in his eyes.

He groans. “You’re killing me, you know that?”

“No, this isn’t anything about you. You haven’t done anything wrong. This is about me.”

Eyes alight, he settles back into his seat. “This should be interesting.”

I search his face before I speak, because I want to be sure I don’t miss any change in his expression. “I’m sorry for teasing you about your ego. It’s not nice. And I don’t want you to think that I think there’s anything wrong with you, because I don’t.”

His face goes through several different emotions before it settles on something I can’t identify. It’s part pain and part pleasure, with a whole lot of ambivalence thrown in.

He says softly, “I know you don’t think there’s anything wrong with me. Which is what makes me assume your parents must’ve dropped you on your head a lot when you were a baby.”

“Oh, for crying out loud. I’m trying to apologize here!”

He grins. “You did. I heard you. And you don’t have to do it again, because I like it when you give me shit.”

When I quirk my lips, he amends quickly, “The business. I meant I like it when you give me the business. Nobody else mouths off to me the way you do.”

“Good to know,” I say, smiling. “Now that I know you like it, the gloves will come off, pal, so you better watch out.”

“I can hardly wait.”

We sit there grinning at each other, until Mason says, “Get outta here. I’ll talk to you next week.”

Then it all falls apart in slow motion.

I don’t know what makes me do it. I honestly don’t. One minute we’re smiling and saying goodbye, the next minute I’m impulsively leaning over to give him a kiss on the cheek.

Only he’s turning his head, so my target moves.

Where his cheek was supposed to be, suddenly his lips are there instead.

His warm, soft, beautiful lips, which part when they meet mine.

Words cannot express how much I ADORED this book. I was hooked from the first chapter, and the banter and bickering between Mason and Madison had me laughing so hard I was crying. It was practically love at first sight, but they push every one of each other’s buttons and are both stubborn as hell.

He’s a surly, bad-boy football star with anger issues and a bad rep, looking to find a wife to clean up his image. She’s a prim and proper, pink-loving Southern Belle matchmaker. They make zero sense on paper, but the chemistry between them is insane. They make each other insane. But Maddie is able to see something inside of Mason that few people do in those rare moments when he allows himself to be vulnerable around her. His crappy childhood left him feeling like he’s unworthy of being loved, and he doesn’t think he’s good enough for her. Thanks to a little help from his very own Hermoine Granger, Mason is able to start a new story for himself and not be a slave to the mistakes of his past.

I loved the occasional chapters from Maddie’a witchy aunt and Mason’s agent, Dick, as they try to play matchmaker with the matchmaker. The chapter with the aunt’s coven is great! And part of me was hoping that she and Dick would find their own love match, so the four of them could create their own little family.

From start to finish, Rules Of Engagement is a gem! I received an advanced copy and voluntarily left a review.

J.T. Geissinger is a bestselling author of emotionally charged romance and women’s fiction. Ranging from funny, feisty rom coms to intense, edgy suspense, her books have sold more than one million copies and been translated into several languages.

She is the recipient of the Prism Award for Best First Book, the Golden Quill Award for Best Paranormal/Urban Fantasy, and is a two-time finalist for the RITA® Award from the Romance Writers of America®. She has also been a finalist in the Booksellers’ Best, National Readers’ Choice, and Daphne du Maurier Awards.

Her first novel was published in 2012. Since then she’s written eighteen more novels. When she’s not writing, she’s reading, drinking wine, surfing the internet, and daydreaming about all the things she’s going to be when she grows up. She lives near the beach in Los Angeles with her husband and deaf/demented rescue kitty, Ginger.