Dolores Chance.
When I was falling apart, I fell in love.
It wasn’t supposed to happen like this.
I ran away from life and ended up running into…his dog.
Actually, his dog ran into me. I don’t care for dogs.
Then I met the owner.
Garrett Fox.
When my neighbor’s sister came to visit,
I promised to show her around town.
I’m an investor in things, not people, not emotions.
I’m not a fan of love. I’ve been burned before.
Then I met Dolores.
When a sexy mature, man-of-means encounters a silver vixen,
healing her broken heart might be worth more than gold.
Romance has no age limit.
ADD TO GOODREADS
Live LINKS:
✦ Amazon US ➜ https://amzn.to/2MqfYoJ
✦ Amazon UK ➜ http://bit.ly/WineandDineUK
✦ Amazon AU ➜ http://bit.ly/WineandDineAU
✦ Amazon CA ➜ http://bit.ly/WineandDineCA 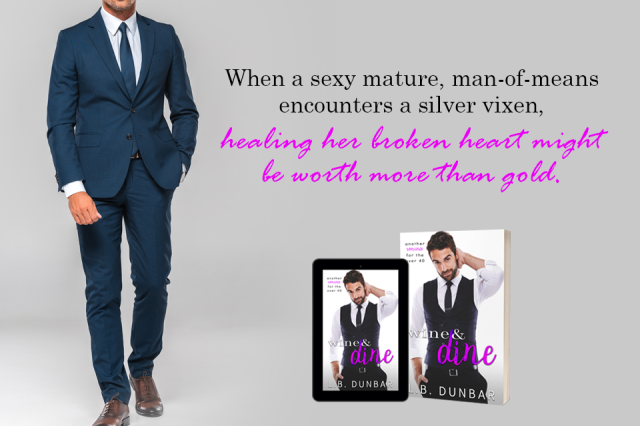 I love LB Dunbar’s romances for the over 40 set! Delores and Garrett are a breath of fresh air. Their whole Wizard Of Oz bit between them — Dorothy, Kansas, Tin Man — was so adorable. Garrett is a perpetual bachelor, settled in his ways and closed himself off to love due to a bad heartbreak. He doesn’t know what hit him when Delores moves into the condo next door. She’s nothing like the younger bimbos he typically “dates” and it takes him totally by surprise that he finds Delores so stunning.

While Delores’ makeover is a huge part of getting her out of her rut, I liked that it didn’t change the essence of her personality. It didn’t become a big part of her story. Was more of a sidenote, and I liked that there wasn’t that focus on her appearance.

There is some great family drama going on with Delores and her brother, Denton. Her brother really puts his nose in where it doesn’t belong and goes behind her back and there’s a great fallout that comes from it. Seeing the siblings patch up their relationship — and the hysterical input from grandma Magnolia — really rounded out this romance nicely.

But as much as I loved Delores and Garrett as a couple, I thought he behaved like a pouty teenager at times. I get that he had insecurities stemming from his childhood and his father abandoning them, but the dude is 50 years old and acted like a petulant kindergartener!

Overall, Wine & Dine is a must-read for anybody who enjoys a more mature couple!
I received an advanced copy and voluntarily left a review. 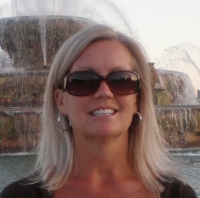 L.B. Dunbar has been
accused of having an over-active imagination. To her benefit, this imagination
has created over twenty novels, including a small-town world (Sensations
Collection), rock star mayhem (Legendary Rock Star series), MMA chaos (Paradise
Stories), rom-com for the over forty (The Sex Education of M.E. and After
Care), and a suspenseful island for redemption (The Island Duet). Her alter
ego, elda lore, creates magical romance through mythological retellings (Modern
Descendants). Her life revolves around a deep love of reading about fairy
tales, medieval knights, regency debauchery, and strong alpha males. She loves
a deep belly laugh, a strong hug, and an occasional margarita. Her other loves
include being mother to four grown children and wife to the one and only.You can find me on Facebook, where I spend too much time.
NEWSLETTER | WEBSITE | FACEBOOK | INSTAGRAM