You wouldn’t believe Dex Riggs and I are from the same town. He’s the ultimate bad boy; I’m the one who goes by the book. He’s a sexy former cop with a shady past; I’m the girl who married her high school sweetheart.

But now my marriage is over, I’m burned out on my business, and worst of all, I never got the baby I wanted. And now I never will.

Unless Dex is willing to make a deal.

I get a baby; he gets… me. For a little while. Once I’m knocked up, we’ll go our separate ways. That’s the rule.

I’ve never broken a rule. Dex has broken all of them.

Which rule will we break first?

I have been waiting for Dex Riggs’ story! I knew he wasn’t the cold jerk that his brothers had written him off as!

Make Me Beg is the final book in the Riggs Brother series, and is the story of eldest brother Dex and Emily’s twin sister, Lauren. While the rest of the Riggs clan — and just about everyone else in town — has just decided that Dex was a dirty cop, Lauren sees past the mask he wears. Dex was her very first kiss back in high school, and she’s always had a soft spot for him. Now, Lauren is piecing her life back together after her divorce, and she and Dex strike up a friendship at Emily and Luke’s wedding… a friendship that eventually leads to Dex offering to be Lauren’s babydaddy through a baby pact. 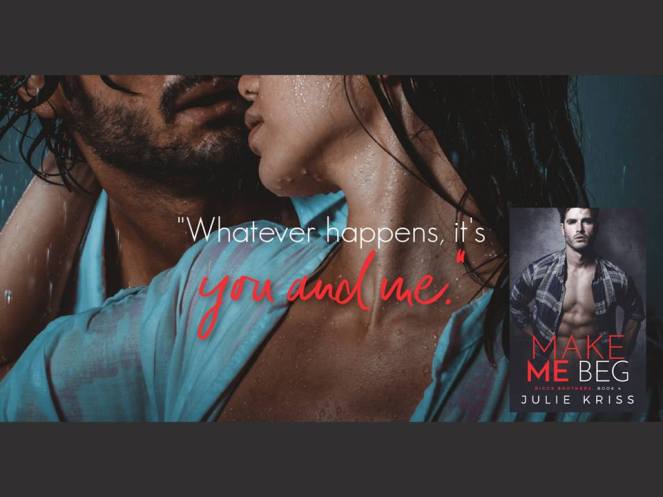 But this book is so muchmore than an agreement to co-parent. As the story delves into Dex’s failed police career, we see how much the loss of his career has affected him. In every aspect of his life. And when he is forced to testfy in one of the biggest criminal cases in years, will Lauren stand by her guy, or write him off as the dirty cop everyone assumes Dex to be?
The relationship that develops between these two lost, lonely souls was amazing. Lauren brings out a different side to Dex than the surly guy we’ve met in the previous books, and I fell in love with him right along with her! I am going to miss the Riggs boys, but Julie Kriss wrapped up the entire series with a pretty boy in an epilogue that covers all four couples. I loved it! I received an advanced copy and voluntarily left a review.