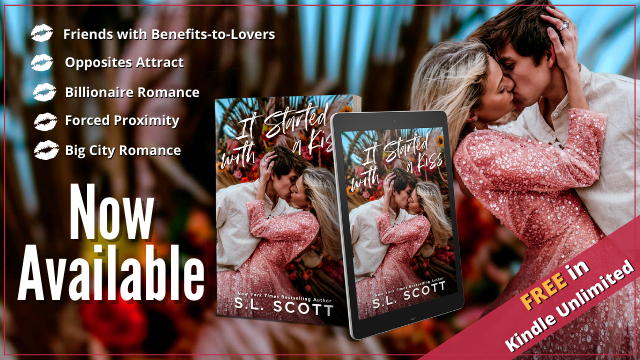 It started with a kiss.

Admittedly, it was a moment of weakness on my part. But even the strong-willed have been known to fall for a hard body underneath a tailored suit and a five o’clock shadow coating a sharp jawline.

It didn’t matter that Jackson St. James was nothing but trouble. Trouble was just my type.

Not making that mistake again.

We were friends, a low-key affair we designed ourselves—over before we began. After all, together we made no sense.

Jackson is into sports. I prefer the arts.

He gulps beer. I sip champagne.

While I might not be described as humble, his arrogance is through the roof.

But when he asks if we can talk, my traitorous Louboutins come to a full stop. Although I’ve seen enough movies to know how these conversations go, maybe, just maybe, he’ll surprise me.

We may have started with a kiss, but how will we end? 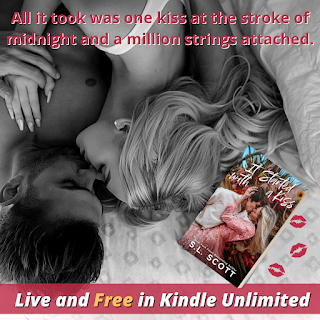 Sunny Shelly’s Review: 5 Stars
Set in SL Scott’s New York Stories series, It Started With a Kiss is Jackson and Marlow’s story, a super sweet friends-to-lovers romance with all the feels.

I have enjoyed getting to know both of these characters on their own in SC’s other books, so I was excited to get to know them even more in this book. And I loved what I read. A bit of a Park Avenue Princess, Marlow had given up on fairy tales after her father’s finances took a hit and life threw her a few curveballs. She had Jackson have had a friends-with-benefits relationship going on for a few months, so when she is evicted from her apartment, he offers his place. He’s been wanting more out of their arrangement for a while now, but will he be able to convince Marlow that he is the prince she’s been waiting for?

These two were absolutely adorable together, and I loved the progression of their story. It was heartwarming and just a simple love story. Of course there are some bumps along the way, but Jackson is super supportive of all that Marlow is going through and is just there for her. It’s as simple as that.

Jackson and Marlow’s path to HEA started with a kiss on New Year’s Eve that turned in to so much more.