Release Date: October 19
From USA Bestseller Natasha Madison comes a brand new Hockey series The Only One.
Cooper.
My name came with big skates to fill. .
At the top of my game, I had everything I wanted, or so I thought. .
Being traded to Dallas was not what I was expecting but neither were the divorce papers I was served. .
Now I’m a single dad in a city that isn’t my home. .
Erika.
Handed my biggest client when I was twenty-two made my dreams come true. .
Over time, our work relationship changed, and we grew closer, leaning on each other for support. .
He was my rock, my best friend..
Then one drunken night changed everything, and I saw what was in front of me all along. .
I just hope that when the dust settles, we won’t regret it.
Grab Your Copy Here:
Amazon | Nook | Apple | Kobo | Audio | Paperback

Sunny Shelly’s Review: 4 Stars
Only One Regret is another great addition to Natasha Madison’s Only One series. This time, we have Cooper Grant — a third-generation character within the author’s hockey series. (His grandfather is the original Cooper and his father is Matt.)

The story opens as Cooper is about to get divorced. He’s a doting dad to his adorable little girls, but feels like a failure because his marriage didn’t work out. Cooper has always had his best friend Erika by his side, and he relies on her support even more in the wake of his divorce. After a night of drinking tequila at his divorce party, Erika and Cooper cross the line and have an explosive night in bed. But when the sun rises, will they regret their actions? And when Cooper’s wife claims she wants her family back, will Erika bow out?

I really liked the chemistry between them. Because their relationship is rooted in years of friendship, everything between them is effortless and easy. And once they get going, things are really hot and heavy. Wow, Cooper is a dirty talker!

My only complaint about this book is the number of side characters involved from Cooper’s family. I have read some of NM’s books over the years but forgot the connections between many of them. The author provides a Stone family tree, which I kept flipping back to since characters weren’t ID’d as Cooper’s aunt or cousin or sister. But aside from that, Only One Regret checked off all the right boxes. 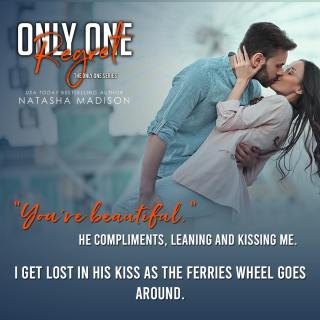