Title: The Edge of Happiness

Series: Edge #1
Author: Kristin Turnage
Genre: Slow Burn Small Town Romance
Release Date: February 5, 2021
BLURB
Cassie Davis is the girl you’d look over in a crowd. She isn’t the life of the party, she’s the DD. The responsible one, the reliable one, the one you can count on. That’s who she is.
When her best friend dies a tragic death on her watch, her life starts to fall apart. The guilt and shame take their toll. Therapists aren’t helping and her dad’s out of options. That’s until her estranged Uncle calls out of the blue, giving her dad the idea of sending her to his small NC hometown for the summer.
Her goal is to fix herself, to find her happiness somewhere amidst the chaos. But, she’s not ready for the smooth talking, gorgeous guy that gets injected into her life. Staying away from him would be best, but when he speaks to her, she feels her hope inside come alive. When he touches her, her world that’s full of chaos and confusion, freezes.
Ryan’s someone that’s never struggled in the looks department. His wounds are deep and he’s not looking for someone to mend them. After his long-time girlfriend cheated on him and ended up pregnant, Ryan doesn’t want to get tied down ever again. He wants to live out his life, working on his family’s farm, and that’s it.
Parties and unattached sex are his new norm, trying to find happiness wherever he can. That’s until her eyes make him feel stupid things in his chest. Ryan doesn’t want to give himself to anyone again, but when she smiles, his world lights up.
When they’re both on the edge of happiness, will they risk it all for each other?
ADD TO GOODREADS 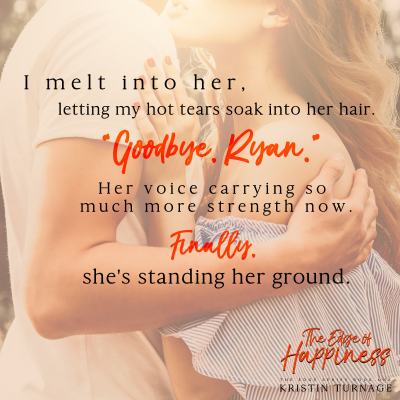 EXCERPT
I let them fade away into the background as my eyes travel around, shamelessly looking around for him. I breathe a sigh of relief when my eyes find him sitting at another table talking to his friends. I wasn’t expecting to meet a guy like him on my first day here. I wasn’t expecting anyone like him at all.
My body goes from ice cold to super-hot in a split second, like a rollercoaster. He is relaxing and having an in-depth conversation with whoever is sitting in front of him. His eyes look around in a break in the conversation, taking in his surroundings. He looks over my way and then back. Then he stops and his eyes slide back to mine. I can’t breathe. His stare is holding me in my place. I can’t even think. I just stare back at him like a dazed animal. Slowly his mouth begins to move again, carrying on the conversation like he wasn’t trapped in a staring contest with me. Never taking his eyes off of me, never blinking. His stare is controlled and also purposeful. My body heat rises so high, I know my cheeks are flaming red at this point.
I watch as the person across from him speaks, but he still hasn’t taken his eyes off me. I need to look away, but I can’t. Wait… Am I flirting? Yes. No. Maybe? I try to swallow the rock in my throat.
Then his lips pull up into a grin that brings a shiver over my body. It’s not a flirty smile, it’s pleasant, welcoming, and it has my head spinning.

I have such mixed feelings about this story. I glossed over grammatical errors and some cringy dialog like Ryan calling Cassie “Girl” — no, just no. But I couldn’t look past plot points like Ryan kissing Cassie hours after he fooled around with Whitney while thinking of Cassie. That’s effed up, dude. And the whole group just forgot that Cassie was in the house when they headed to the lake? Even Ryan, who had literally just left her to shower in his bathroom after that previously mentioned kiss? WTF? He tells her he’d take her virginity whenever she wants, but then pushes her away. He sleeps with his crazy ex who broke his heart because he doesn’t feel like he deserves to be with Cassie? It’s not cheating since he dumped Cassie first, but it just felt icky. Ryan runs so hot and cold, I got whiplash trying to keep up with his mood swings.

But there is much that I liked about Cassie and Ryan as characters, both dealing with scars and battling demons, and finding solace in the other. So I’m torn between not liking this book because of the rotten behavior and ignoring all of that because there really are some sweet moments.

This story is a slow burn friends to lovers romance, but while I felt the deep friendship that formed between Cassie and Ryan, I never felt that pull to ship them as a couple. Especially with his whoring around.

I think there is a lot of potential here with this new author, and I’m curious to see what she brings to the table in the rest of this series. We shall see…

Kristin Turnage is an indie author that lives close to the beach in Florida with her husband, two daughters, and two cats. She has been writing for eight years and has been chasing her dream of becoming a published author for a long time. The Edge of Happiness from The Edge Series is her first published work and has turned her dream into a reality. She is excited that you are all taking this journey alongside of her.
AUTHOR LINKS
FACEBOOK GROUP
INSTAGRAM
WEBSITE 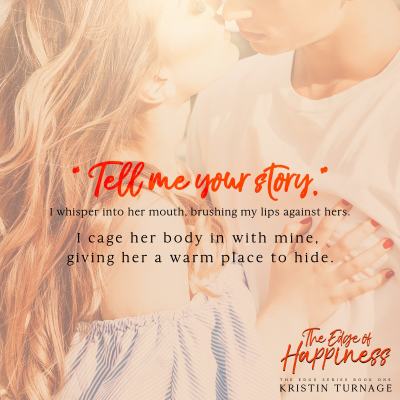