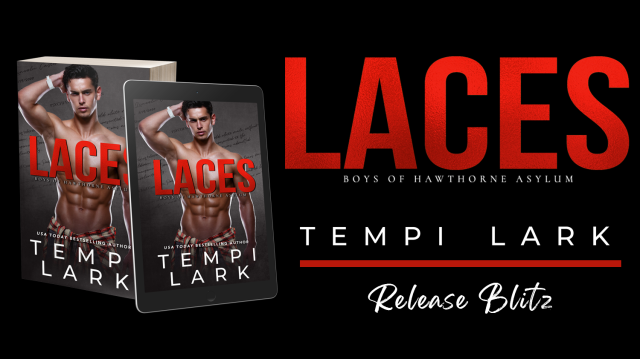 Release Date: January 31
Welcome to Hawthorne Asylum.
Welcome to hell.
This place isn’t run by the doctors who make you talk or the orderlies who force you to swallow your pills.
It belongs to them, to the Infamous Four.
Tabloids, talk shows, documentaries—their faces have been plastered everywhere. Not because of their impressive rap sheets, but because of how they look.
And when I arrive, they take notice. Especially their king: Lincoln “Laces” Caster.
He’s dark and disturbed.
He’s controlling and possessive.
Exactly the kind of boy I should stay away from if I want to clear my name and get out of here.
*LACES is not intended for readers under seventeen. This book does have RH elements, strong language/cursing, and triggering scenes (that might not be suitable for everybody). Laces is a slow burn that builds toward intimate scenes as the series progresses. This is book one in the Boys of Hawthorne Asylum series. 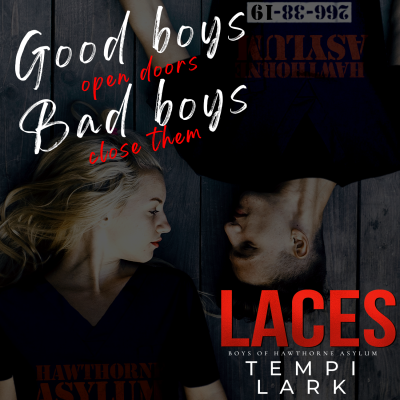 Hmm… This book was an interesting ride. Gambrielle has been committed to an insane asylum for young adults after being accused of murdering her sister. Really, it was her powerful DA stepfather who did it, and he had Gambrielle locked up to keep his deed from being exposed. Her one goal while at Hawthorne is to get a weekend pass so she can look for more evidence and clear her name while honoring her sister’s memory. Along the way, she meets the crew who run Hawthorne — not the medical staff, but the super-hot patients. And their leader, Laces.

There’s an immediate connection between Laces and Gambrielle, and he’s not sure what to make of it since she’s feisty and not like the submissive girls he’s usually attracted to. I liked seeing this alpha come a little unhinged around this girl who has completely captivated him. And not unhinged mentally, but emotionally!

Tempi Lark is a new-to-me author, and I thought that Laces was very well-written, even if there were some holes in the story. Laces is short — only about 20 chapters, which I read was not the author’s original intent. But her plans for the book had to change due to the pandemic. That explains why I felt like I didn’t get to know Laces very well. There is so much I want to know about him and his backstory that just wasn’t explored. Hopefully the author will delve into that in the second book. I was also not expecting a cliffhanger ending. Way to dangle a carrot for the continuation of this story! 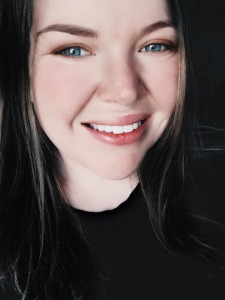 She lives in Tennessee with her husband & son.
When she’s not writing she can be found playing monopoly with her husband & son (they think she cheats), binge-watching Netflix (Outlander & Grey’s Anatomy), or reading a book.
Connect with Tempi Lark
Website | Newsletter | Facebook | Instagram | Reader GroupTwitter | Pinterest | TikTok
Hosted By: