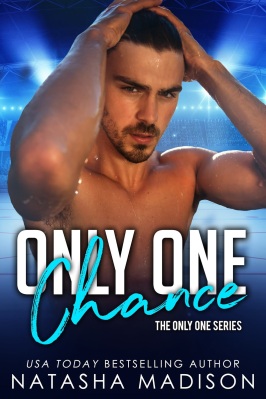 Miller
They called me the pretty boy on and off the ice. Hockey’s most eligible bachelor.
When my teammate asked me to donate one date to his charity, I figured why not. Worst case, I’d spend the night with a fan. Best-case scenario, she would be hot. What I wasn’t expecting was for my dream girl to be the highest bidder.
For years, she brushed me off, and now, I finally had a chance to take her out and show her who I really was.
With only one shot at this, I really hoped I didn’t mess it up.
Layla
At the top of my career, I was riding the wave of my sports talk show having the best rating on the radio.
I also made it a rule to never date any sports players.
It was my one rule, and I was sticking to it until I bid on the only man who gets under my skin.
All it takes is one touch, one night, one kiss, and only one chance.

Only One Chance was rather unexpected! I really loved Layla and Miller’s story. The push and pull between these characters was great, and any book that has me crying during the makeup is a 5-Star read for me!

Miller has been chasing after Layla for four years, but she refuses to give him a chance. He’s a big flirt, and she wants nothing to do with a guy who won’t treat her with the respect she deserves. After a drunken bid on Miller in a bachelor auction and trying to pawn him off on Grandma Nancy, Layla reluctantly agrees to go out with Miller herself. And she is treated to the most romantic night of her life.

I loved how nervous Miller was when he finally got Layla to agree to go out with him. And he really puts in the effort to woo her, despite her shooting him down every step of the way. His flirtatious nature with his fans is a speedbump in their relationship that they get over rather quickly, but then there is a whopper of a plot twist in regards to Layla’s past that I wasn’t expecting. That hurdle is not so easy for them to overcome — but the revelation explains so much about why Layla was hesitant to get involved with Miller, and the things he says out of hurt and anger just tear them both up.

While Miller felt like it was a lie of omission, Layla was scared to tell him her secret. Once he gets his head on straight, can he convince her to give him one more chance?

That teaser at the end for Manning’s book… AGH! I can’t wait! I received an advanced copy and voluntarily left a review.