Every action has a consequence, and Claire Ward knows it. And yet, even knowing that her decision to swap places with her identical twin sister, Lia, for a night could be disastrous, she still does it.
Why?
Because it will give her an evening with the man she’s been crushing on for years, Lia’s best friend, Finn.
Miss Straight A Student has thought through all the angles, and knows the risk is worth it. And everything would have been fine, if Finn had been the one to show up at her door.
But it wasn’t.
Bauer Davis— Finn’s half brother and his exact opposite in just about every definable category is the one waiting for her instead. A professional snowboarder, Bauer is covered in ink, full of attitude, and has a chip on his shoulder the size of Mt. Olympus. The kind of bad boy that Claire has never been attracted to before.
Now the good girl is with the wrong brother for a night, and when the consequence is that they have to pretend to be together for an event, it’s nothing she could have predicted. But maybe, just maybe, what makes Bauer so bad, is exactly what Claire needs. 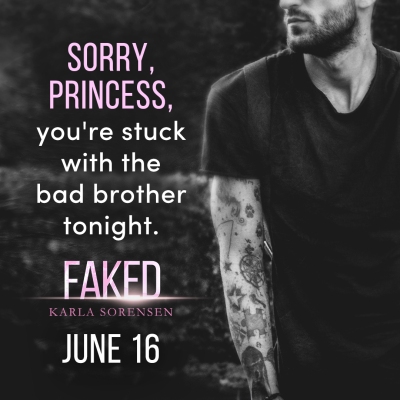 So. Damn. Good. Claire and Bauer are perfection.

I loved Lia and Claire in The Marriage Effect, and the shenanigans the twins got into when Paige and Logan were dating. So I was super excited to see what would become of the twins as young women. A twin swap goes astray in Faked when Claire attempts to take Lia’s place to get closer to her crush, Finn, but Finn’s half brother shows up instead. Bauer knows right away that it’s Claire, not Lia, who he’s picked up for the charity dinner and they pretend to be dating to impress an investor for his parents. But there is so much more to this fake relationship as the story unfolds.

At first glance, Claire and Bauer are quite the opposites-attract kind of couple. But they are also kind of kindred spirits: She’s always felt interchangeable with her twin sister, like she didn’t have an identity of her own, and he has always been the outcast of his family. The black sheep stepson.

Bauer is all bravado and cocky swagger, but he is such a kind, sweet soul underneath that facade. He’s never known what it is like to have someone firmly in his corner. He’s never felt love and safety and security in another relationship the way that he feels when he spends a snowed-in weekend with Claire. Meanwhile, Claire feels beautiful and strong when she’s with Bauer, and for the first time in her life, she has something that belongs only to her. Something that her twin didn’t have first. But when Bauer finds out that the only reason he and Claire met to begin with was because she wanted a shot with his brother, will their actual attempt as a relationship be over before it gets a chance to start?

I loved how fragile Bauer really is underneath all of his tattoos and piercings. He has zero frame of reference when it comes to being loved and in a supportive relationship and he tries so hard for Claire. For her, he’ll try. And when he freaks out and walks away, he returns to grovel with the help of the most adorable furry friend. And as it turns out, badass snowboarder Bauer Davis is perfect boyfriend material.

Well, let’s see … I’m a wife and a mother. If the things that I write bring a smile to someone’s face, then I’ve done my job. I am obsessed with Outlander (both the books and the show). I’m almost exclusively a romance reader, which means some people will never consider me a literary snob. If I could meet one historical figure, it would be Jane Austen. I received my Bachelors in Public Relations and worked in health care marketing before I had my babies. I hate Twitter. I do it, but I hate it. Also, if you want to get on my good side, bring me wine and I’ll love you forever.