Broken With You, the next suspenseful tale in the all-new Stark Security series of standalones, from New York Times bestselling author J. Kenner, is available now!

After surviving a troubled childhood, Denise can’t believe that she’s blissfully married to her partner and soulmate. She’s confident that not even Mason’s long-term, deep-cover assignment will shake their bond. And she certainly doesn’t anticipate that when he finally walks back through her door that he’ll have no memory of her, himself, or their time together…

When Mason is pulled out of an operation gone bad, all he knows is what he’s told — that he was a covert agent, that he has information vital to national security somewhere in his head, and that they can tell him no more for fear of burying those hard-fought secrets even further. They tell him nothing else; not even that the beautiful woman who makes his heart beat faster is not just his partner, but also his wife.

The secret she must keep wrecks Denise, who wants only to return to Mason’s arms. But despite the desire that still burns hot between them, she can’t tell him who she is—or that she’s carrying his child.

But when dark forces threaten both their lives in order to retrieve the information trapped in Mason’s mind, it’s not their past that will be tested, but the tenuous new love now burning hot between them.

You don’t want to miss this sexy, suspenseful amnesia romance!

The sidewalk was clear on both sides, and only a few empty cars dotted the parking area as heat shimmers rose off the asphalt. The world was a fucking inferno, but all things considered, that seemed apropos. Hadn’t he been tossed right out of the frying pan and into the fire?

A sign that looked like it hadn’t been updated since the fifties sat perched atop vertical steel poles and identified the rundown little motel as the Stay-A-While Motor Inn. Hopefully that was only a suggestion, because he wanted to get out of there sooner rather than later.

He walked down the sidewalk toward the sign, passing the pasted colored doors along the way. Green, room 106. Blue, room 105. Yellow, room 2014.

This path was familiar, and there was some comfort in that.

At the same time, having the full extent of his remembered life marked by the Easter egg colors of a half dozen doors weren’t exactly enough to have him jumping for joy.

The same woman was in the office. About sixty with Lucille Ball hair-he remembered I Love Lucy!

She smiled at him from behind a counter. “Well, you’re looking much better today. Got yourself some sleep, I guess?”

“I did,” he said, then cleared his throat as he glanced around the room. “You got a bus schedule?”

She shook her head. “Sorry, no. Where you heading?”

“Just meandering,” he said, as if he was Jack Reacher, and it was perfectly normal to wander aimlessly around the country.

“Well, let me see if I can find a schedule online for you.” She inched toward a computer that looked to be older than he was, but stopped midway down the counter to answer the phone as she rummaged through a drawer.

He cocked his head, his hand sliding into his pocket as his senses went on high alert.

“Oh, good, I found it,” she said after ending the call. She pulled a crumpled brochure from a drawer. “So the Greyhound station’s not too far away. That what you’re looking for? Or did you want local routes?”

“Greyhound,” he said, thinking of the 323 area code. “I need to make a phone call. And then I think I’ll head to Los Angeles.” 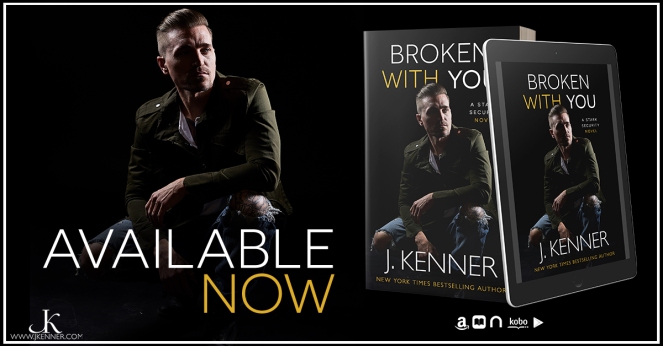 Broken With You is not your typical second chance romance! What do you do when your husband comes out of a secret mission that caused him to have amnesia and you can’t tell him anything about your relationship for fear that he will never regain his memories and put national security at risk? It’s a slippery slope for Denise!

I felt her angst over not being able to tell Mason the truth, and all of the half-lies she had to tell him. And poor Jack/Mason! What a half-state he’s living in! It’s amazing, though, the things your body just remembers without even thinking about it. There were some really nice moments between them even when Jack had no idea he was Mason.

This book is part of a series that is a spin-off of JK’s Stark Security series; I have not read any of the other Stark books, but did not feel like I was missing pieces to the puzzle. While characters do cross over, this story is absolutely Denise and Mason’s tale.

Kenner (aka Julie Kenner) is the New York Times, USA Today, Publishers Weekly, Wall Street Journal and #1 International bestselling author of over one hundred novels, novellas and short stories in a variety of genres.

JK has been praised by Publishers Weekly as an author with a “flair for dialogue and eccentric characterizations” and by RT Bookclub for having “cornered the market on sinfully attractive, dominant antiheroes and the women who swoon for them.” A six time finalist for Romance Writers of America’s prestigious RITA award, JK took home the first RITA trophy awarded in the category of erotic romance in 2014 for her novel, Claim Me (book 2 of her Stark Trilogy) and in 2017 for Wicked Dirty in the same category. Her Demon Hunting Soccer Mom series (as Julie Kenner) is currently in development as a television show.

Her books have sold over three million copies and are published in over twenty languages.

In her previous career as an attorney, JK worked as a clerk on the Fifth Circuit Court of Appeals, and practiced primarily civil, entertainment and First Amendment litigation in Los Angeles and Irvine, California, as well as in Austin, Texas. She currently lives in Central Texas, with her husband, two daughters, and two rather spastic cats.