We’re celebrating BRED by Ginger Scott! BRED is a coming-of-age romance inspired by Great Expectations you won’t want to miss!

My life was irrevocably changed the moment I stepped foot inside Elena Alderman’s grand front doors. A lifeless tomb on the edge of Chicago’s South Side, the Alderman home sat in one of the city’s oldest and wealthiest neighborhoods, and Elena Alderman was the queen.

She was also mad.

Not the kind of madness that’s readily apparent. No, her psychopathy was far more surgical—more…insidious. She was surrounded by beautiful things—most notably her grand piano and her adopted son, Henry.

I fell in love with both.

My gift blossomed when my fingers touched her black and white keys. But my life began when I became haunted by the boy. Henry Alderman was a handsome blend of arrogance and seduction, and as we grew up together, I found it more and more impossible to separate him from my thoughts. I envied his life. I imagined how my name—Lily—would look with his. I became his closest friend…and more. I gave him my kiss, locked away his secrets, and loved him even when it was hard to.But we were just a game. Elena Alderman made the rules. And when she decided to change them, she broke everything.

Excerpt from BRED By Ginger Scott

(Copyright Ginger Scott, 2019)“You know this stuff…” he starts, but I interrupt with an emphatic shake of my head. When his fingers splay out over my back I freeze. I follow the path my book takes back to the place it started in front of me as Henry slides it in place, flipping open to the chapter I’m trying to memorize. Knelt down next to me, he leans closer, resting his right arm next to my left one—we are touching.

I swallow. I’m going to fail. I cannot memorize something like the varied historical degrees of differences between a Protestant hell and a Lutheran one while the master of all hotness is sharing a desktop with me. My arm hairs are literally electric, standing up and reaching to plant themselves in his skin. I’ve gone completely primal—my body convinced that I am the gatherer in need of this hunter.

“Look,” he says, leaning in even closer and reaching to flip the pages. I barely register the movement of his thumb under a bold section of words. When his eyes catch mine still stuck on his face, I jump in my seat a little.

“Sorry,” I say, clearing my throat. “I’m just overwhelmed. Maybe a little slow, too, from being in here so long.”

It’s partly true, but I’m also just crushing. Crushing—that’s what Nicki calls it. She rolls her eyes every time she catches me doing it too, then labels it with that word. I crush in the dining area. I crush between classes when Henry pokes my arm with his index finger as we pass in the halls. I crush when I watch him sprint across the lawn every day at three in the afternoon, late for rowing. It’s literally become how I know it’s three o’clock! My body just instinctually glides toward my window at exactly 2:59. Pathetic!

At this point, we should just say that I’m crushed rather than crushing. Crushed and utterly destroyed of all pride.

I am gatherer.
“What you need to do is make up a rhyme. Something that will help you keep all of the key words in your brain so when it comes time to write them down in order, you’ll have them there.”

I draw in my lips and let the acid climb up my throat.

“I don’t even understand that. Ugg, I’m hopeless,” I say, letting my head fall flat against the book. I bounce my forehead there lightly while I eke out a desperate laugh at my own expense.

“You aren’t hopeless.” I feel the warm breath from his chuckle and smell the mint of his gum, and it’s intoxicating enough without his touch, so when the warm hand slides the hair from my cheek I go full hypnosis. His fingers trace my jaw, and my head lifts from the light pressure of his hold. For a moment, I believe in myself just because of the look in his eyes when our stares meet. He’s dead serious—and God, the way he’s looking at me, hair all tousled, smile soft and true, cheeks lifted as if they’re glad to see me.

Like a drunk, I lean closer, my lips parting and ready—my mind imagining everything I’m about to feel—Henry’s mouth on mine, the graze of teeth against my lips, us standing as his arms sweep around my back before his hands rush up my spine into my own messy hair.

None of that happens.

I get an inch away from his mouth, my eyelids fluttering with nerves and uncertainty whether they should close or remain open, and Henry turns a few inches to his left, stiffening and backing away just enough to keep me from making this worse—as if I can make this worse somehow. The rush of heat that coats me isn’t from passion—it’s from humiliation. My eyes remain open just long enough to see the movement in his neck as he clears his throat. His soft smile is replaced with a hard line, drawn under the pity that slants his eyes.

I think I understand hell a little better now. It helps that I’m in it.

“It’s fine.” His voice is laced with discomfort. In one blink I erased everything that was easy between us. All because of my damn fantasies.

Fine. That word—so short, so four-lettered. Such a lie. I ruined everything.

I was really excited to read Bred. I loved the idea that it is inspired by Great Expectations. But while I liked the story, I didn’t love the story. It was a really slow start for Lily and Henry, and it took me a while to really get into them as a couple. This isn’t so much a love story as it is a coming-of-age story for Lily.

I just couldn’t get past Elena’s machinations. She was cruel for no reason, and I hated the way she played both Lily ad Henry. I received an advanced copy and voluntarily left a review. 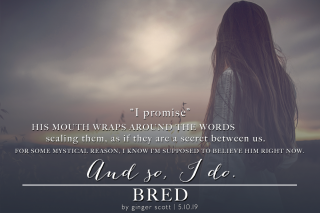 Ginger Scott is an Amazon-bestselling and Goodreads Choice Award-nominated author of several young and new adult romances, including Waiting on the Sidelines, Going Long, The Hail Mary, Blindness, How We Deal With Gravity, This Is Falling, You and Everything After, The Girl I Was Before, Wild Reckless, Wicked Restless, In Your Dreams, The Hard Count, Hold My Breath, A Boy Like You, A Girl Like Me, Memphis and Cry Baby.

A sucker for a good romance, Ginger’s other passion is sports, and she often blends the two in her stories. (She’s also a sucker for a hot quarterback, catcher, pitcher, point guard…the list goes on.) Ginger has been writing and editing for newspapers, magazines and blogs for more than 15 years. She has told the stories of Olympians, politicians, actors, scientists, cowboys, criminals and towns. For more on her and her work, visit her website at http://www.littlemisswrite.com.

When she’s not writing, the odds are high that she’s somewhere near a baseball diamond, either watching her son field pop flies like Bryce Harper or cheering on her favorite baseball team, the Arizona Diamondbacks. Ginger lives in Arizona and is married to her college sweetheart whom she met at ASU (fork ’em, Devils).