Marcus by Kelsie Rae is HERE!!!

Moving in with my little sister’s best friend isn’t the brightest thing I’ve ever done. In fact, I’m pretty sure you can have me committed for accepting the offer. I’ve been in love with her for as long as I can remember, and I’ve been able to keep my hands to myself for all these years. But now? Now, she’s moving on without me and I’m scrambling to keep up without letting her slip through my fingers when she’s always felt out of reach.

I’m going to fight for her.

I just hope I’m not too late.

The guy I’ve been in love with since I was a little girl is officially shacking up in my spare bedroom. Pretty sure I’m breaking every rule in the book by having him sleep under my roof, but it doesn’t matter anymore. Not when I’ve already let go of my silly crush to pursue other dreams that don’t involve a sexy guy who has only ever seen me as his little sister’s shadow.

No, it’s time to let him go and move on.

I just hope I can.

I am absolutely loving Kelsie Rae’s Signature Sweethearts series! The push and pull between Marcus and Natalie in this book was everything. They have both been in love with the other for so long, but neither one of them has ever ‘fessed up. Natalie didn’t think that he saw her as anything other than Sophie’s shadow, and Marcus was too stuck on the fact that Natalie is his sister’s best friend and how him dating her would affect the girls’ relationship.

Now that Sophie has moved in with Nathan and Marcus and Natalie are reluctant roommates, things shift between them. The scene with Luke from Book 1, Liv, was one of my favorite parts. I loved what Luke said to Marcus about regrets and how it kind of pushed him into finally making a move. Of course, that comes just as Natalie had finally decided to do something for herself, and it will have a major impact on their future.

I love a slow burn romance and this was a fabulous one. The sexy times are implied, but not described (as with all of Kelsie’s books) — and it makes no lick of a difference. The relationship between Marcus and Natalie is wonderfully described, and I loved how they progress from both thinking that their feelings were unrequited to being in a full-blown relationship.

Since these books are all interconnected standalones, there are glimpses of some of the other couples as well, which I always enjoy seeing when I’m reading a series.

Overall, this was a wonderful feel-good best friend’s brother story! I received an advanced copy and voluntarily left a review. 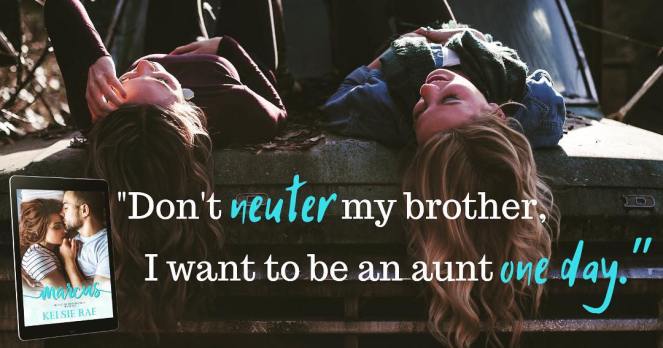 CHECK OUT THIS EXCERPT:

As I grasp the handle, I close my eyes and slowly count to ten.

By the time I reach seven, I nearly jump out of my skin when an onslaught of banging erupts from the other side.

“Coming!” I yell, louder than necessary.

“Any day now!” he shouts back.

The sound of his voice also does funny things to me. Rolling over me like hot honey, causing a slight burn that I want to pull away from, only for it to be soothing and sweet the next minute.

Shaking my head, I twist the handle and pull the door open.

I quirk my brow before folding my arms over my chest and leaning against the jamb. “Patience is a virtue, Marcus. Maybe you should try it sometime.”

“Why hello to you too, Noogie. Are you going to invite me in?”

“I haven’t decided yet.”

My comment causes a deep laugh to escape him. “Well, at least you’re being honest. Where’s my sister?”

I shrug my shoulder. The motion causes my oversized sweatshirt to slide down my shoulder, revealing a few inches of skin.

His gaze zeroes in on the exposed flesh, burning me for a solid one-Mississippi before he glances past me like I’m no more than a fly in his soup.

“Cover up, Noog. No one needs to see that.” And with that, he takes a step toward me, making me take a step back and giving him the space to enter. It’s like some sick kind of dance that neither of us can control.

“It’s a freaking shoulder, Marcus. I’m pretty sure you have them too.” My voice is thick with sarcasm, though it doesn’t stop me from checking out his ripped muscles through his damn jacket.

Seems he’s been working out lately.

I take a second to really look at him, taking note of all the subtle changes that have happened since I last saw him. It’s only been a couple months since he crashed Indie’s wedding in the Maldives to rescue his baby sister from the big bad wolf––aka Nathan––after she found out she was pregnant. But the entire event was such a blur that I feel like it doesn’t really count.

And if that event doesn’t count, then the last time I saw him would probably be during the championships of Gateway Guardians, a video game that Marcus gets paid to play professionally.

Yes. You heard that right. Marcus gets paid to play video games.

Tilting my head to the side, I notice that his man bun is missing and his hair is now closely cropped to his head on the sides, leaving it a little longer on the top. I’d like to say it makes him uglier, but I’d only be lying to myself.

“Why’d you cut your hair?” I ask before mentally slapping my forehead.

He smirks cockily at me. “Noticed, huh?”

I roll my eyes. “It’s hard not to when I’m used to a giant man bun being tossed in my face every time I see you.”

He shrugs, mirroring my motion from only a moment before, then sets his duffle bag on the floor behind the couch.

Sophie and I moved into this apartment about six months ago, and it’s been amazing. The location isn’t fantastic, and the furniture is all second-hand, but it’s New York City, for crying out loud!

I couldn’t have been happier when the manager placed the brass keys in my hand after I signed the lease.

The lease that would feel a heck of a lot like a ball and chain only a few months later, when my best friend, and co-leaser, decided to get knocked up on a one-night stand.

At least everything worked out for them. Now, I just need it to work out for me.

I release a soft sigh of defeat when Marcus‘s shoe squeaks against the hardwood floor, grabbing my attention.

“So where’s my sister?” he asks again. I’m not exactly surprised by the abrupt subject change. It’s what he does.

“Late.” There’s no need for further explanation. The girl is always late.

He nods his head knowingly before heading to the fridge like he owns the place and peeking inside.

“Where are your groceries?” he asks when he comes up empty.

I shrug, causing my sweatshirt to slide down all over again. The moment feels like a terrible rendition of the same scenario only a few minutes before. Hastily, I push the fabric up when I see him looking at me with fire in his eyes as he stares a hole in my previously exposed shoulder.

“I’ve been eating out lately,” I defend.

It’s only a partial lie. I have been eating out lately. When I have time to eat at all. And when I can afford it.

Okay, maybe I haven’t been eating as much as usual.

His eyes narrow as he scans me from head to toe. “Well, you obviously aren’t eating enough.”

My jaw drops. “I’m sorry…what was that?”

He lifts his chin in my direction before continuing. “You’ve lost weight since the last time I saw you. Don’t tell me you’re trying a new diet or some bullshit. I swear—”

I stomp closer before lifting my finger and poking him in the chest. “Say one more word, and I’ll neuter you, Marcus. I can take care of myself. And who the hell do you think you are? If I want to try a new diet, then I’m going to try a new freaking diet.”

He tilts his head to the side, assessing me for a split second before scoffing. “See? This is why I knew it was a bad idea for you guys to move here. My sister ends up pregnant, and her friend is withering away from some fad diet. You’re curvy, Natalie. Get over it. Not everyone is meant to be a stick.”

I lift my hand to slap him right in his stupidly attractive face when the hinges squeak on my front door.

Dropping my arm a fast as I can, I jump away from Marcus like he has cooties.

About Kelsie
Kelsie is a sucker for a love story with all the feels. When she’s not chasing words for her next book, you will probably find her reading or, more likely, playing with her “monsters”.

She adores chocolate, photography, baking, and chick flicks. And now that she’s actively pursuing her writing dreams, she’s set her sights on someday finding the self-discipline to not eat an entire batch of cookies in one sitting.