Title: The Beach in Winter
Series: Lyon Family #1
Author: Leslie Pike
Genre: Contemporary Romance
Release Date: March 6, 2019
Blurb
It’s said
no man is an island. But writer Parish Adams is out to
prove them wrong. Broken and unable to bear the violent death of his child,
he’s isolated himself on a private beach in Maine. He finds no comfort in the
warmth of relationships. For Parish, the cold Atlantic Ocean is company enough.
Scarlett
Lyon’s life
has taken a dramatic turn. Single and independent, living in Montana, nothing
was tying her down. Then her sister’s fatal accident changes everything. She
finds herself guardian for her nephew Sam. Now she must
relocate to Martin’s Beach. And more jarring than that, become a mother figure.
Three
wounded hearts. Two passionate souls. One tempestuous Beach In
Winter.
ADD TO GOODREADS 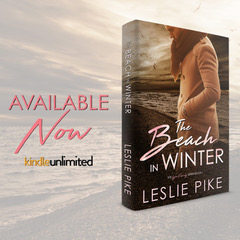 The Beach In Winter is a phenomenal story of grief, mourning and healing. Neighbors Parrish, Scarlett and her teenage nephew Sam are all grieving incredible losses when their paths cross in a small Maine beach town one fall. Over the course of that winter, all of their lives are forever changed as they strike up tentative friendships that become everlasting bonds.

Parrish is drowning in his grief five years after his son’s brutal death. A total recluse, he spends his days drinking and smoking when he’s not writing his detective series. He doesn’t even know that his next-door neighbors have died until a forced interaction with their son’s aunt, who is now Sam’s guardian. Little by little, Scarlett and Sam being Parrish out of the black hole he’s been existing in. And along they way, he helps her navigate parenthood and helps Sam grieve his parents.

There are so many sweet moments between Sam and Parrish. He expertly walks the fine line of being a friend and mentor with the young boy. And Sam brings out the paternal feelings in Parrish that he long ago buried. The romance between Parrish and Scarlett is equally sweet. It develops organically from a mutual attraction to something so much deeper.

On that beach one winter, three lost souls come together, healing one another, showing one another a way out of the darkened, and letting each other know that it’s okay to sometimes just talk to the waves when you don’t want to talk to people. The waves always listen.

Author Bio
Leslie Pike
has loved expressing herself through the written word since she was a child.
Her passion for film and screenwriting led her to Texas for eight years,
writing for a primetime CBS series. Leslie lives in Southern California with
her Pom-Poo, Mr. Big. She’s traveled the world as part of film crews, from
Africa to Israel, New York to San Francisco. Now she finds her favorite
creative adventures take place in her home, writing Contemporary Romance.
Author Links
WEBSITE