Title: Somewhere Between Us
Author: Holly Hall
Genre: Contemporary Romance
Release Date: February 7, 2019
Blurb
We were an unlikely couple: the cocky athlete and the preacher’s
daughter. Once he finally won me over, he wasn’t supposed to break my heart.
Ten years later, he’s back in our hometown. Only now, he’s different. A
cunning businessman, a big-city resident.
…and the father of someone else’s child.
When he left town, I stayed. Now I’m a teacher by day and aspiring
artist by night. Dating the one man he hates more than anyone else: his
brother.
I have no business falling for him again; he traded this life for one
he thought was better. One that didn’t include me. But history has a way of
repeating itself, and old flames? They don’t always go out.
ADD TO GOODREADS 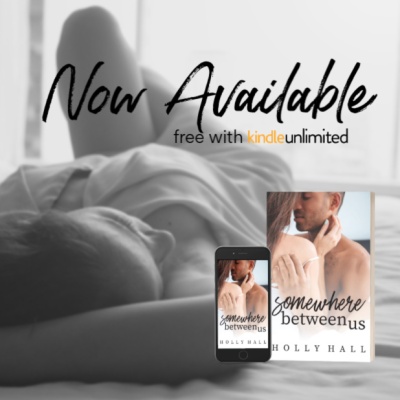 Somewhere Between Us is a second-chance romance full of angsty goodness! The story is told from Cameron’s POV, and alternate back and forth between Then, when she and Jeremy were in high school, to Now, ten years later when he’s reluctantly returned to town as his stepfather is dying. I really liked the flashbacks to how their relationship came to be, from reluctant acquaintances to Cam tutoring him and a genuine friendship forming to the developing of romantic feelings between them.

I did think that the story dragged a bit to get to the reasons why Jeremy broke up with her, and why he was so dang angry with her when he returned to town. I struggled with that for a while because he was the one who left her, but it did become a clearer picture once that flashback happened.

This book hits all the right notes between Jeremy and Cameron as he tries to woo her back, and sweet little Asher totally gives his dad a few more points in my book! 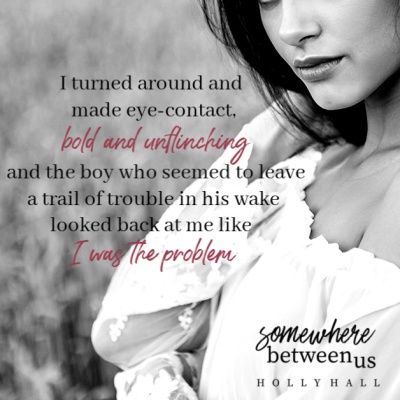 “You really
want to know who I thought you’d be with when I came back?” Jeremy said,
sobering. He goes on without my answer. “I didn’t picture anyone, because I
knew all along it was supposed to be me.”
I feel my
pulse in my temples in the residual silence. Why? Why would he say something
like that, knowing how much I yearned for him after he left? For what could’ve
been?
“Not what
you wanted to hear?”
My breath
hisses against my teeth. “Not what I expected to hear.”
“The truth
hurts sometimes.”
No kidding.
It feels like tiny crowbars are wrenching open my heart, allowing him to slide
in through the cracks. “And when did you find that out? Before or after you
made your laps around campus?”
“I always
knew it.”
Ouch. Was
that supposed to hurt more or less than any other answer?
Before I
get the chance to ponder that further, his hand is on my neck, his fingers curled
into my hair. His mouth is on mine in less than the span of a heartbeat, the
time it takes a hummingbird to beat its wings. There is no chance for reason to
invade my senses, because he’s already there, his lips filling me with
nostalgia, his tongue caressing the ache of loneliness that’s only expanded
since the moment he left.
Time stops.
Or maybe it moves backward. I can remember everything he made
seventeen-year-old me feel when he singled me out in a classroom and wouldn’t
accept that I didn’t want to let anyone in. That I’d embraced the isolation my
classmates made me feel.
He filled
me with strength. He made me forget. But most of all, he made me feel.
And then he
left.
I push my
chair back from the table, breaking the connection between us. The look in his
eyes is half dreamy, half dazed. Not at all confused as to why I cut that
reminiscent moment short.
“You can’t
just kiss me like that.”
“Like
what?”
“Like you
never left.”
He rubs his
fingertips over his lips. “You can’t tell me you don’t feel like nothing’s
changed.”
“But
everything’s changed.” I stand and push my hair back with both hands, clutching
my head. “You hurt me, Jeremy. I don’t think you’re even aware of how much. It
wasn’t just puppy love.”
“That was a
different time. We were younger. We both had a lot of growing up to do.”
“You were
everything to me!” I’m borderline yelling until I remember Asher upstairs in
his room. I run a hand down my face and shake my head. “You’re too important to
be casual. I can’t be indifferent with you.” And I can’t act like every time he
touches me, the scar tissue around my heart doesn’t quake.
He stands
and matches my gaze, his expression just as hard and intense as it was before.
Can’t he see he has the power to break me? Can’t he see I can’t afford to let
that happen anymore?

Author Bio
Holly Hall drinks coffee on the
daily, would love to travel for a living, thinks animals are often better than
humans, can count on one hand the number of things she loves more than reading
and Texas A&M football (okay, that might be an exaggeration), and couldn’t
handpick a better family than her enormous one. She is the author of four other
standalone contemporary romances, Forever Grace, All the
Pieces That You Left, Love in Smoke, and Smoke and
Lyrics. She resides with her husband, daughter, and German shepherd in
Houston, Texas.
Author Links
FACEBOOK