Title: The Break-Up Bet
Author: Cat Carmine
Genre: Standalone Romantic Comedy
Release Date: January 31, 2019
Blurb
Never make a bet with a man who plays to win…
Especially not a man like handsome, arrogant Connor Pratt.
AKA the huge PITA who’s currently crashing in my spare room.
AKA my brother’s best friend since they were about six.
AKA the one guy who still makes me feel like an awkward tongue-tied loser.
But when Connor moved in, I got a glimpse of another side of him. Because, like me, Connor’s going through a nasty break-up. And, like me, he’s just doing whatever he can to get through it.
Unfortunately, his method involves drinking alarming amounts of whiskey and watching a lot of, um … movies … that make every inch of my skin flush.
I’m just trying to be helpful when I tell him that he should try my way: copious amounts of baked goods, sappy romantic comedies, and late nights spent whining with girlfriends.
But I should have known Connor would take that as a challenge.
Now, he says he’ll try my way of dealing with a break-up … but only if I agree to try his. Six months rent to the person whose method works best.
We call it the break-up bet. And I’m going to win. Except right now, it feels like there’s a whole lot more at stake than just rent money…
ADD TO GOODREADS 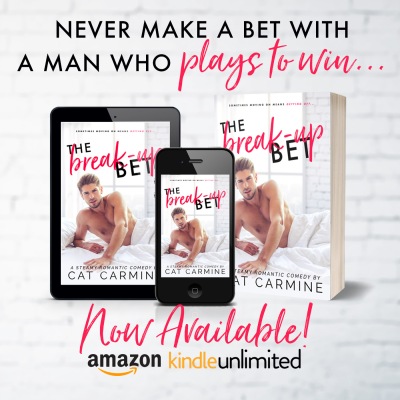 The Break-Up Bet is a cute, quirky, fun brother’s best friend romance. Lucy is a hoot, and Conner is the playboy that I love to see fall to his knees when he realizes that he’s in love.

Lucy’s had a thing for her brother’s best friend for years. But Conner is quite the ladies’ man. They both find themselves going through a breakup at the same time — while Conner happens to be crashing on her couch. But both of them approach mending a broken heart in very different ways.

I love the twist that this story then takes. A relationship pact between Conner and Lucy is formed, but it’s whose method of dealing with a breakup is more effective, rather than the typical no-strings attached fling. Of course, there is sizzling sexual chemistry between the two, and the build-up to them giving in is a marvelous slow burn. But I really enjoyed the different twist that Cat Carmine put on this story. I wish we could have seen more of Conner and Lucy together as a couple and how their relationship progresses, but I didn’t feel unsatisfied either.

I’ve never read anything by CC before, and this was a delightfully fun story. The characters are well-rounded and relatable, and their relationships with their friends are as well. This book is a standalone, but apparently the other characters have been the subjects of previous books. I am definitely intrigued in finding out more! 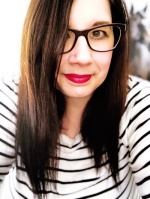 Cat Carmine writes contemporary romance and romantic comedy.
She also happens to like drinking wine, eating cake, buying too many books, and
snuggling with her elderly cocker spaniel (oh, and her husband too.) She loves
— and writes — books with sweet and sarcastic heroines and strong, sexy heroes
who like a little bark with their bite. She thinks witty banter is the best
kind of foreplay, and she tries to infuse all her stories with heart, humor and
heat.
Sign up to her mailing list to get an exclusive free book: http://smarturl.it/ccromancejoin
Author Links
NEWSLETTER