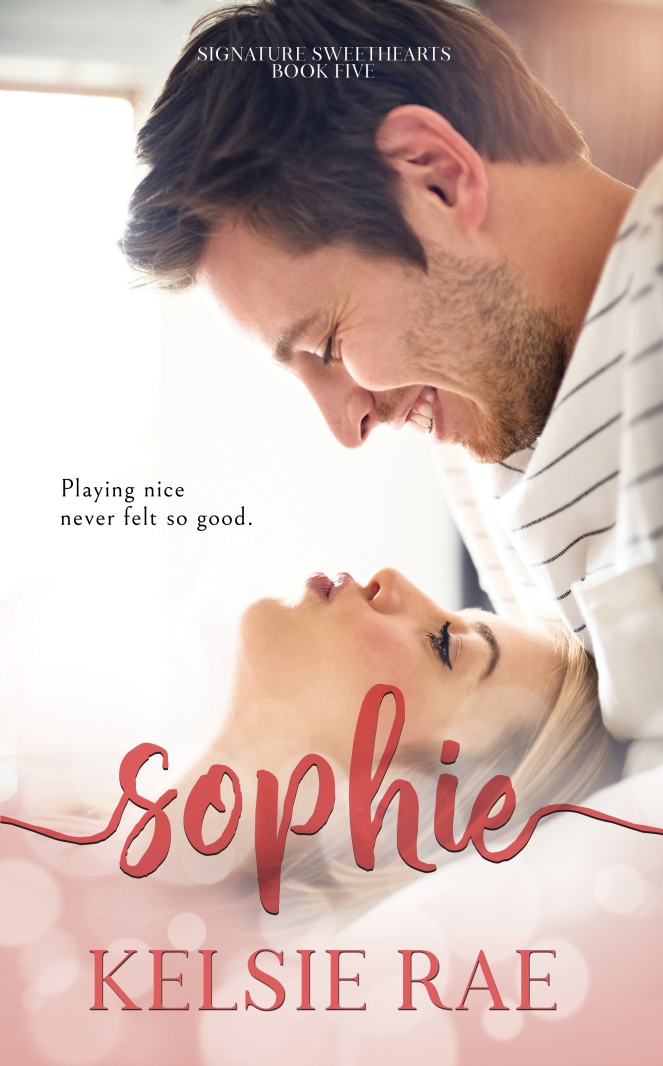 Sophie by Kelsie Rae is HERE!!!
Available Now on Amazon: https://amzn.to/2TqmDP4
KU subscribers can read Sophie for #FREE
Blurb:
Sophie
Aren’t one night stands supposed to stay in the past? Aren’t they supposed to be with a stranger whom you never have to see again?
Yeah. I thought so too.
And then one of my best friends asks me to be the maid-of-honor at her wedding.
Wanna take a guess who the best man is?
I’m screwed.
Nathan
I don’t do feelings. I don’t do relationships. And I sure as hell don’t do love.
And then I was stupid enough to sleep with Soph. The girl who screwed with my head in ways I never could’ve imagined.
So I left.
I ran.
And I’m going to continue to run as soon as my best friend’s wedding is over.
It’s one weekend. How hard can it be?
Add Sophie to your TBR: https://bit.ly/2DyVXGi

I adore the Signature Sweethearts series by Kelsie Rae! Sophie is another sweet, romantic installment in this series of standalones, and it’s packed full of conflicting emotions, a hero who is denying what is right in front of him, and a heroine who is trying to protect herself from more heartache.

Before the book starts, Sophie (who works at Indie’s bakery) has a one-night stand with Nathan, who is Rhett’s coworker. Nathan has a firm one-and-done rule, not believing in love due to his parents’ relationship and farce of a matchmaking business. Neither Sophie or Nathan have forgotten their one night together, even though he’s moved across the country a few days later.

But when Nathan and Sophie are forced to spend the weekend together as maid of honor and best man for Indie and Rhett’s destination wedding in paradise, the want and need that they feel for one another causes them both to reevaluate where things stand between them.

This sweet story has all the feels. And we get to catch up with Quincy and Jude, and Breezy and Derrick, while the story sets up the next book: Sophie’s brother Marcus and her best friend Natalie.

CHECK OUT THIS EXCERPT:
I sleep about as peacefully as you can expect on a flight, because…it’s a flight. And the seats are terrible. And the person behind me keeps kicking my chair. And I need to pee.
Dammit.
After thirty minutes of tossing and turning, and only getting a few minutes of solid sleep, I throw in the towel and head to the tiny restroom in the front of the plane.
The majority of the passengers are asleep, and the quiet atmosphere is almost soothing. The gentle hum from the engines seems to act as a lullaby for the people around me. I use the lavatory and am washing my hands in the tiny sink, when I hear the muffled sounds of moaning coming from the bathroom next to mine, along with the rhythmic thumping that can only be described as someone getting it on in the bathroom. I try to hold in the laughter and secretly want to high-five the person joining the mile-high club as we speak.
At least someone’s enjoying their flight.
Nathan’s face comes to mind as I’m reminded of my one and only sexual encounter.
And man…was it good.
That is, until the Weiner left me without a trace. I know the mechanics of a one-night stand. I’m not completely naive.
But this didn’t feel like one. It felt like so much…more.
Blah. How cliche is that? A girl loses her virginity to a notorious bad boy, and she assumes he felt an inkling of what she did while it happened?
Stupid, Sophie. Get a hold of yourself, girl!
The squeaking and moaning stops, bringing me back to the present.
Shit. I better get out of here.
I dry my hands on a paper towel quickly, deciding it would be best if I snuck back to my seat before they emerge from the bathroom and are caught in the act.
Or the…after the act?
Regardless, I gotta get moving.
I open the door and step into the tiny space the plane designers call a walkway, when the door across from me opens simultaneously, revealing a disheveled-looking flight attendant with a dopey smile on her face.
She almost looks drunk, and I snort when she takes a wobbly step out of the small bathroom.
However, when I’m greeted with a face that’s been haunting my every thought for the past four weeks, I almost collapse.
Be strong, Soph.
He looks incredible. Better than I remember. Sandy blonde hair. Broad shoulders. Tapered waist. And warm brown eyes you want to get lost in.
The scruff is new, though. I don’t want to admit that I like it. That it gives him a certain edge that he didn’t have before.
Nathan’s arrogant smirk slips for the briefest of seconds when his eyes connect with mine. However, like a chameleon, he slides it right back into place, grinning cockily at me.
“Fancy seeing you here,” he quips, eyeing me up and down like a piece of meat.
I swallow past the golf ball lodged in my throat while debating how I should handle this situation.
The old Sophie would’ve made a snarky comment to both of them before confidently walking back to her seat in her classy high-heels and making him wish he’d get another opportunity to be with her.
The new Sophie is shaking in her proverbial boots, trying not to puke as her stomach rolls with the knowledge that the guy she’s been dreaming about for the past month just had sex with another woman thirty seconds ago. Proving that I really am an immature girl with unrealistic dreams of finding her happily ever after.
Screw you, Nathan.
By some miracle, my legs are steady as I take a step forward and pat Nathan’s stubbled cheek, condescendingly. “I’m so happy the enhancement surgery went well, honey. The doctors were worried you wouldn’t be able to perform.” I slap him once again with a little more force, ignoring the way his scruff tickles my palm.
I turn to the flight attendant. “I really hope you made him wrap up. The problem’s hereditary and…” I lift up my index finger before bending it and pouting dramatically, “No little boy should have to deal with that.”
I smirk at the two of them before walking back to my seat with the confidence of a runway model. Collapsing into my chair, I take a few deep breaths in through my nose, releasing them through a tiny “o” in my lips as tears threaten to spill onto my cheeks.
I will not let them fall.
About Kelsie
Kelsie is a sucker for a love story with all the feels. When she’s not chasing words for her next book, you will probably find her reading or, more likely, playing with her “monsters”.
She adores chocolate, photography, baking, and chick flicks. And now that she’s actively pursuing her writing dreams, she’s set her sights on someday finding the self-discipline to not eat an entire batch of cookies in one sitting.