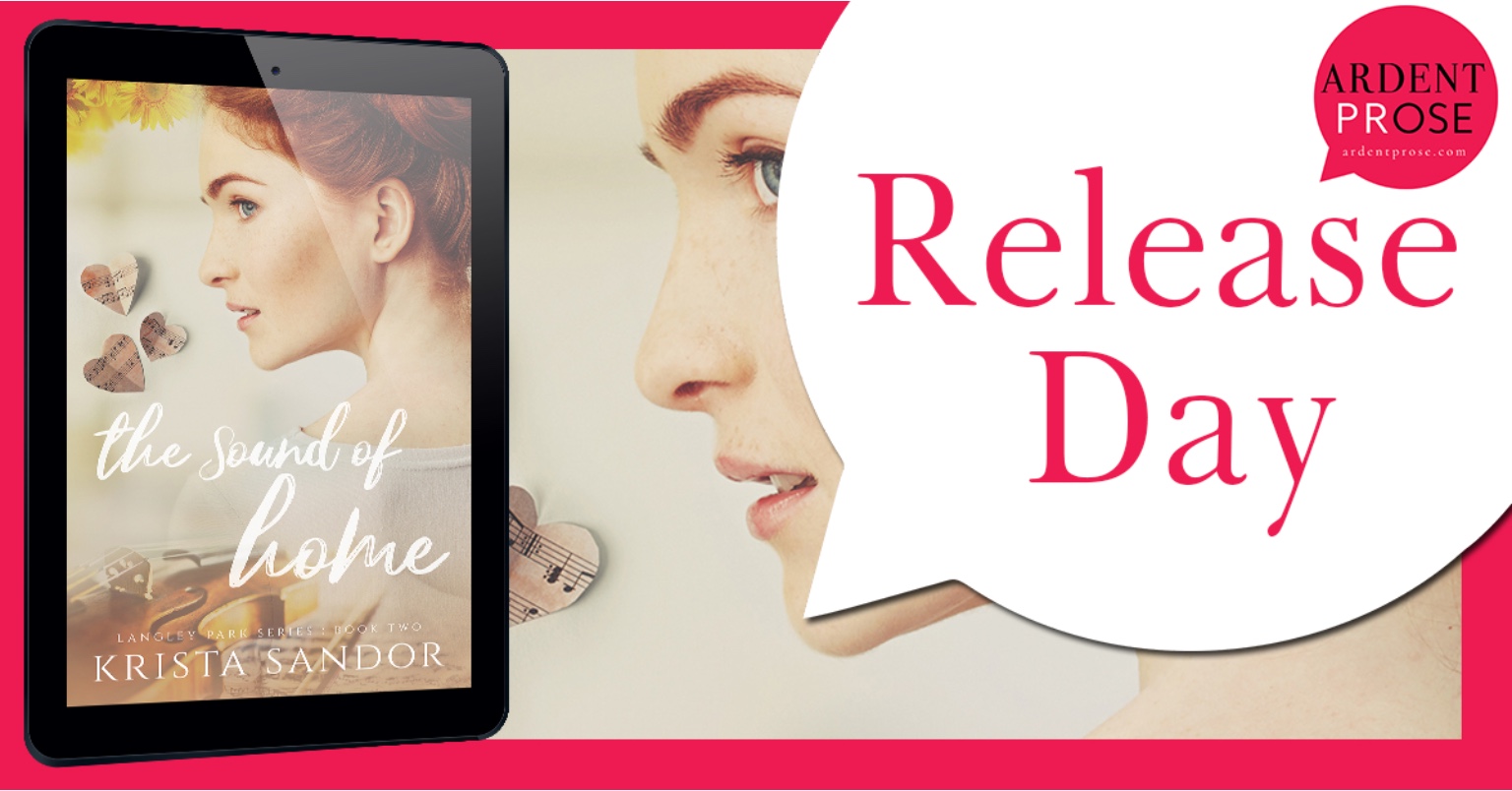 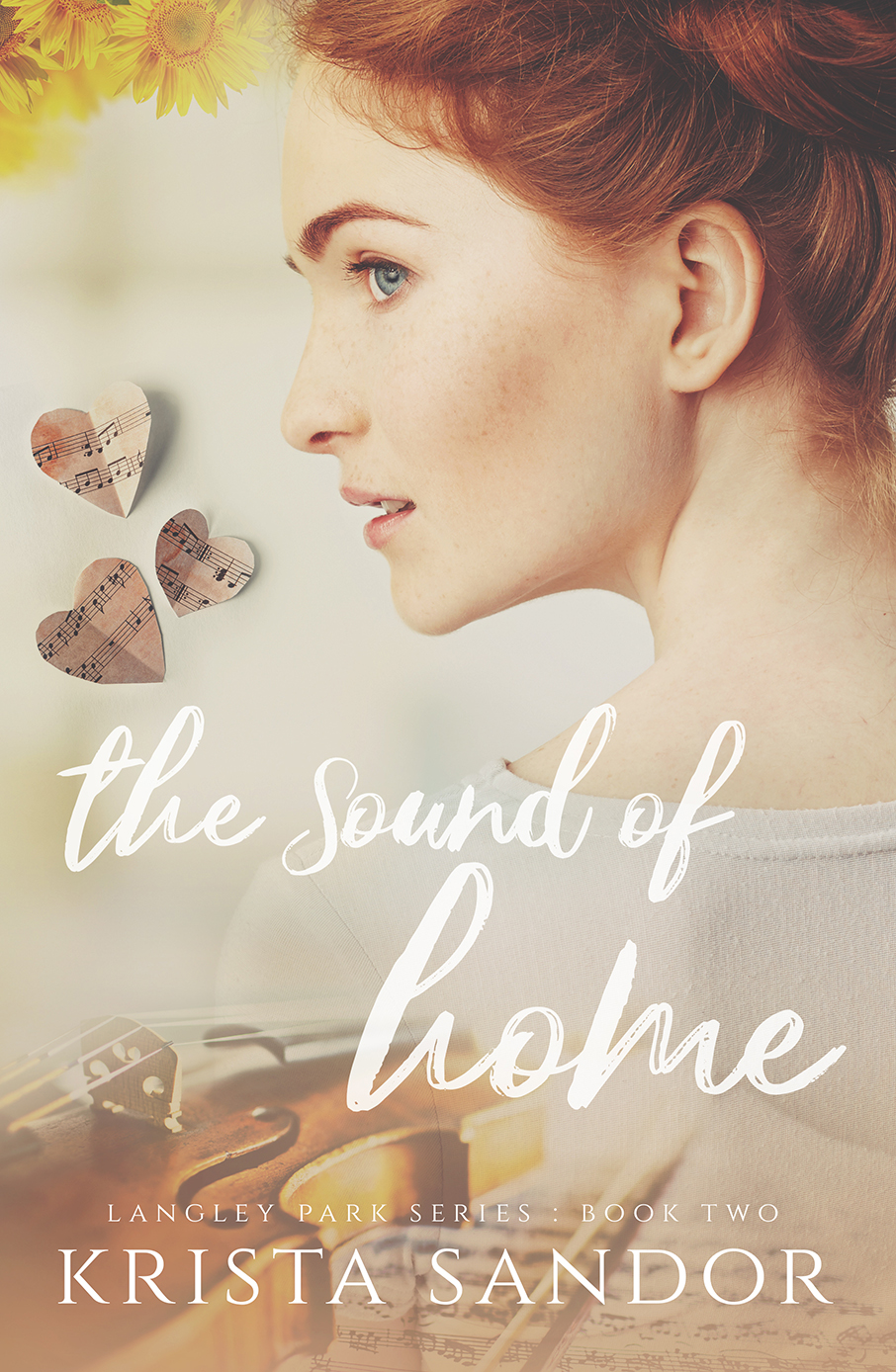 One steamy summer night. One unforgivable betrayal. Two lives forever changed.
Em MacCaslin was never an ordinary girl. A child music prodigy, she competed in elite competitions and performed with symphonies all over the world. At eighteen years old, her future couldn’t have been brighter. But all her dreams were shattered in one night.
A night she doesn’t remember.
After twelve years of running from the past, she’s back in Langley Park. And she wants answers.
Sparks fly and passions ignite when the man who betrayed her trust offers to help uncover the events of that fateful night.
But not everyone wants Em to learn the truth. A truth with the potential to kill.

The Sound of Home is a sexy standalone romance in the Langley Park series.

Em smoothed out the pleats of her skirt, and Michael bit back a chuckle. While most of the girls at the party were wearing cut-off jean shorts and tank tops, leaving little to the imagination, Em had on a plaid skirt, a short-sleeved cardigan, and a string of pearls.
Fucking pearls.
“Why are you looking at me like that?” she asked, attempting to look incredulous.
“You wore pearls to a Sadie’s Hollow party,” he answered. He’d never thought pearls and plaid were sexy before tonight.
“I’ll have you know,” she raised her index finger, “that tonight I helped raise quite a bit of money for the Kansas City Symphony. Like big-time dollars.”
Jesus, she was an adorable drunk. “You did, did you?”
“I most certainly did,” Em replied, coming to her feet and pretending to play an air violin.
“What did you play?” he asked, unable to hold back a grin.
She closed her eyes and began to bow with her right hand. “Just Paganini. Nel cor piu non mi sento.”
“Oh, yeah, just Niccolò Paganini’s most difficult composition, and arguably one of the most technically challenging pieces ever written?”
She opened her eyes and met his gaze. “Just that.”
Holy shit, she was stunning.
“Could you lose the air-violin for a minute and sit back down. I’d hate to see you fall on your ass again.”
“I almost fell on my bottom. Thankfully, Kyle Benson was there to catch me,” Em replied and settled herself on the rock.
“You can say ass, Em. Nobody will hear you.”
“I know.”
“Then say it. Your dad’s not here.”
She twisted her pearls.
“You can’t do it, can you? Once a good girl, always a good girl.”
“Hey,” Em said, grabbing his hand. Her touch sent a rush of electricity surging from the point of contact. “Do you remember when we played “Heart and Soul” on the piano back when we were in kindergarten?”
“How could I forget? Your dad let us stay up late and watch Big. You lost your mind watching Tom Hanks and that old dude jump around on the giant keyboard.”
“Do you remember your part?” she asked, her face hopeful and glowing creamy white in the moonlight.
Sweet Christ, she was beautiful. When the hell did that happen?
Michael tried to push any sexual thoughts from his mind. He had to remind his twitching cock that nothing could happen with Em.
He released a breath. “I could knock out my part if I had to.”
“Let’s do it,” she said, then turned toward the long, smooth boulder.
Em positioned her hands on the rock as if it were a piano. She gestured with her chin for him to do the same. “Ready, and…” she said, and began to play. She watched him with a furrowed brow as he pretend-played alongside her. “You’re doing it wrong. The notes are more staccato.”
“Em, we’re playing on a fucking rock. How can you even tell?”
“I just know, Michael. It’s like the music talks to me, like it lives inside of me. It’s always been with me.”
He nodded. Fuck, he could get lost in her eyes. Did she still wear those little cotton panties, the ones with tiny flowers, like she did when she was just a girl?
Enough, MacCarron!
He mentally punched himself in the mouth. Of course, she didn’t. She wasn’t eight. She was eighteen, a woman. The little girl he used to play piano duets and flashlight tag with had grown up.
Em nudged him with her shoulder. “Put your hand on top of mine. Then you’ll be able to feel how the notes were meant to be played.”
He draped his large hand over hers. For a second, he thought Em trembled, but then she began to play. As her fingers danced across the imaginary piano keys, Michael felt each note and could hear the music almost as if he was inside her, connected to her.
“See, if you played each note with a bit more—”
He silenced her with a kiss. Her body tensed. He pulled back a fraction, allowing his teeth to nip at her bottom lip. The contact made his head swim. Her lips parted, and he deepened the kiss. She sighed into his mouth, her breaths becoming shallow. If kissing Em was the last thing he would ever do, he would die a happy man. But he wanted more. He slipped his tongue into her mouth and caressed her in a hot, desperate rhythm, begging her to match his intensity.
Em was sweet. So fucking sweet. He tasted the raspberry punch on her tongue, but it had an edge to it. She must have been drinking something before the punch, something spicy like whiskey or rum. The two flavors assaulted his senses and teased his cock. He knew Em MacCaslin was innocent, everyone did. But the intensity of this kiss told him there was something deeper, something darker inside her even she didn’t know existed.
Then it hit him. He was kissing Mary Michelle MacCaslin.
Jesus, what was he doing?
His second-guessing ended when she whispered his name, her voice hungry with need.
“Oh, Michael.”
Em spoke not only to his cock, which was begging for release like a bull in a bucking chute, but to his soul. When she guided his hand across the pretend piano keys, an almost spiritual awakening burst inside him, like standing at the crossroads of a tornado and a tidal wave.
He lifted his hand from where it rested on top of hers and slid his fingertips up the length of her arm. He trailed them across her shoulder and found the string of pearls resting around her neck. Slowly, he wrapped the delicate necklace around his fingers and pulled her in closer. Each time he twisted another segment, Em gasped as if she was moving closer and closer toward something her body never knew it wanted and could no longer deny. 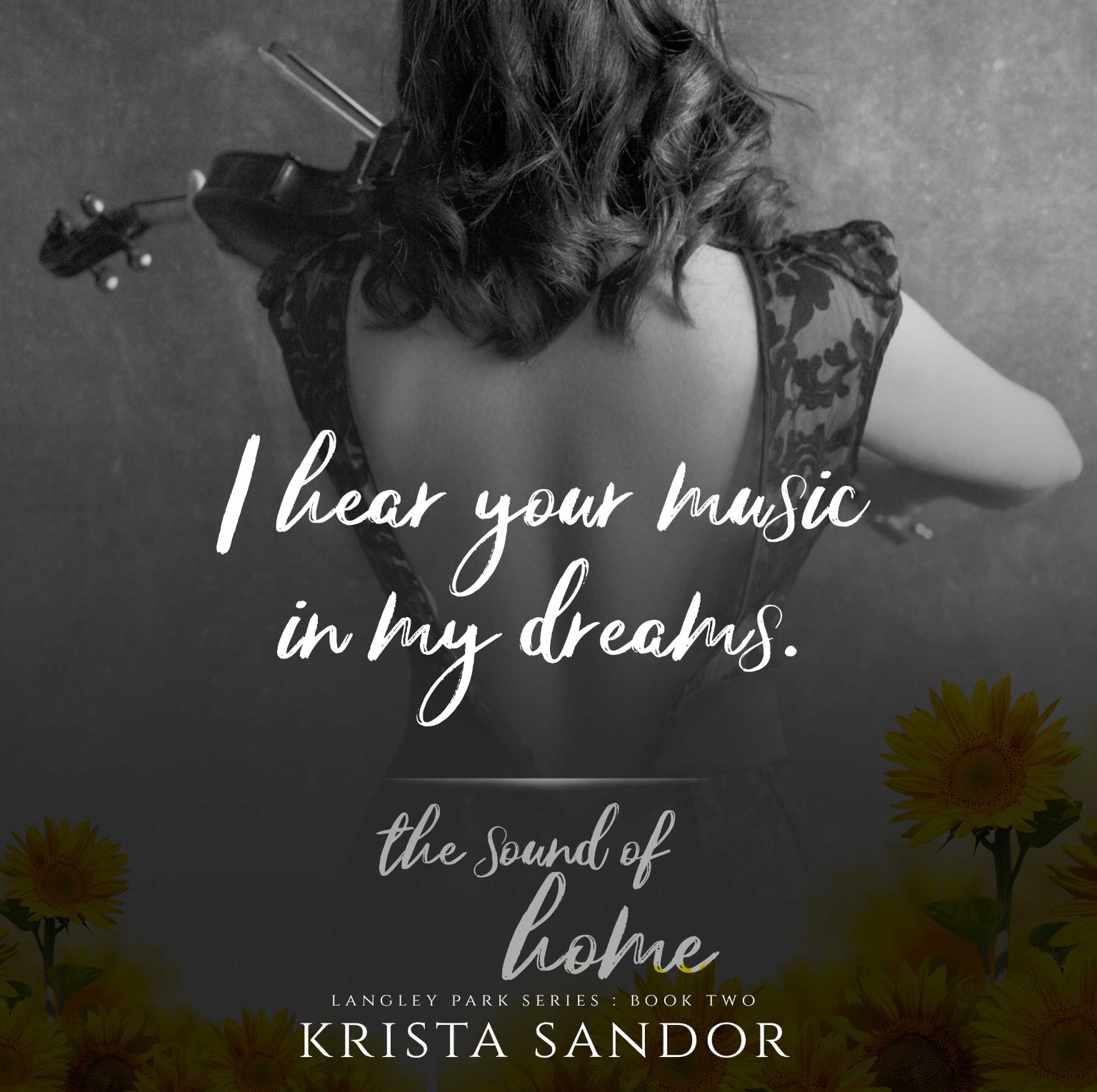 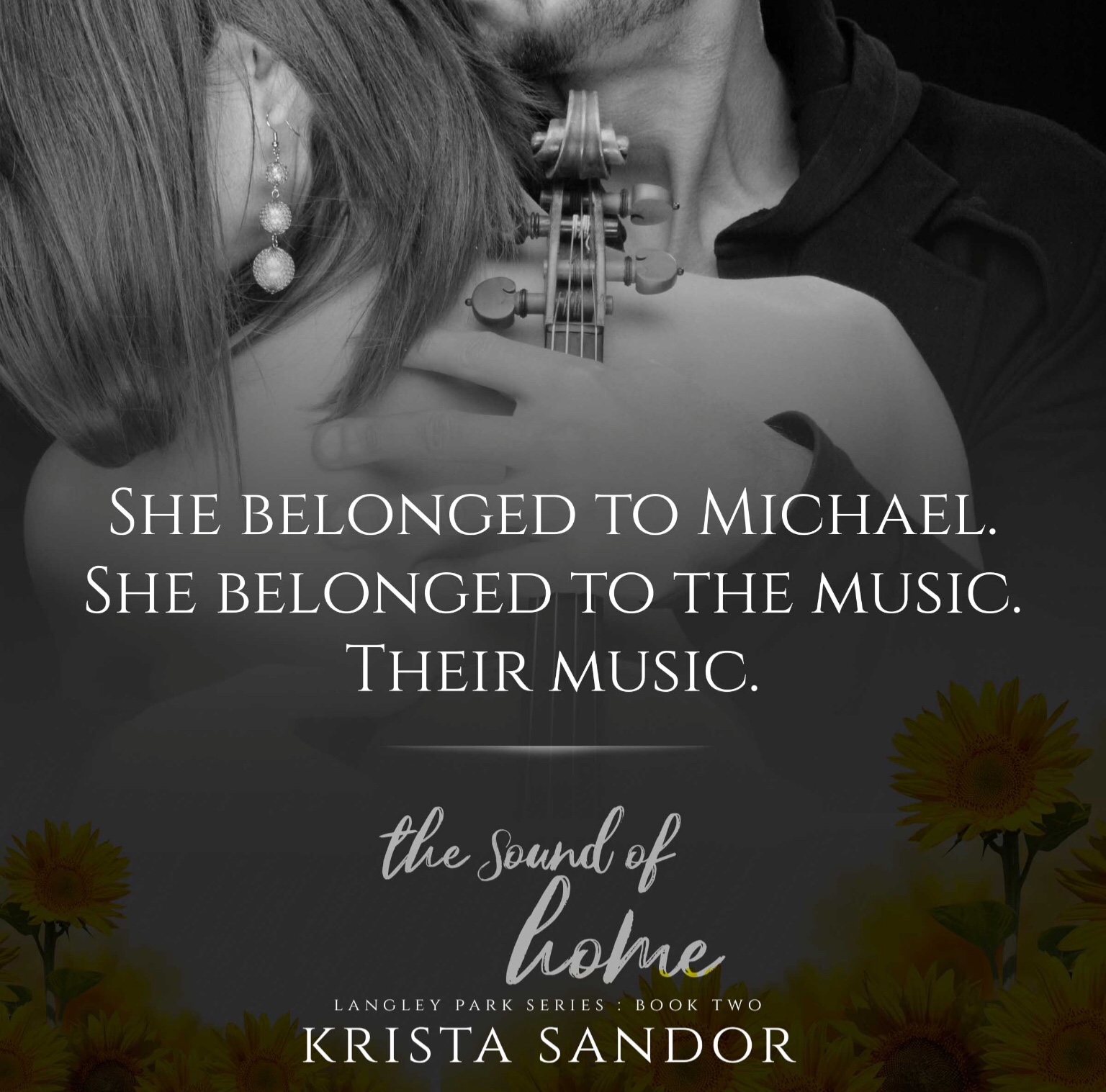 If there’s one thing Krista Sandor knows for sure, it’s that romance saved her. After she was diagnosed with Multiple Sclerosis in 2015, her world turned upside down. During those difficult first days, her dear friend sent her a romance novel. That kind gesture provided the escape she needed and ignited her love of the genre. Inspired by the strong heroines and happily ever afters, Krista decided to write her own romance series. Today, she is an MS Warrior and living life to the fullest. When she’s not writing, you can find her running 5Ks and chasing after her growing boys in her adopted home of Denver, Colorado.
Twitter  Facebook  Goodreads Web  Instagram